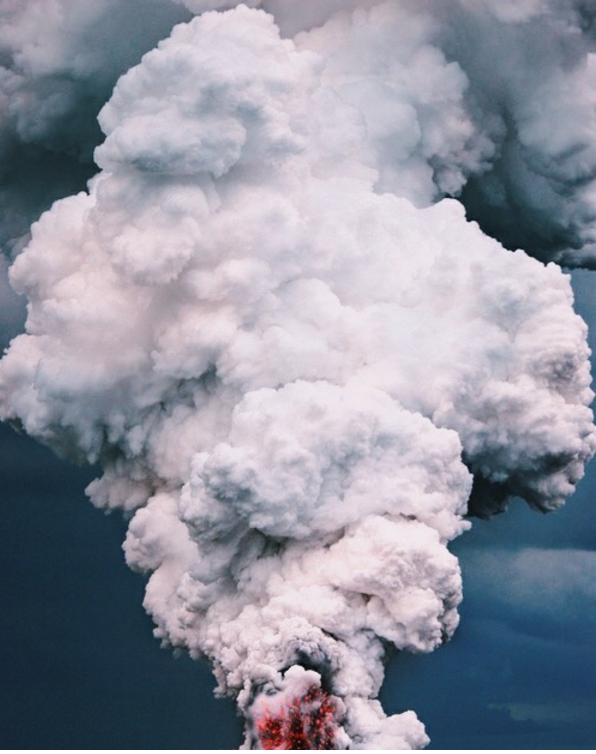 Why do people try to prepare for the end of the world?
I can tell you this much; the Apocalypse never gives a 24 hour notice or even a call in advance. When he arrives, he doesn't care if you have a cup of coffee prepared, two sugars and a tablespoon of non-dairy creamer. He doesn't care if you have a smoke of any kind to spare(he's trying to cut down). He also doesn't care if that wine stain in your carpet is covered.
He doesn't plan on staying for very long.
Unlike you or I, the Apocalypse never had the chance to choose his career.
Waiting.
Burning.
Then waiting again.
It's a family business.
And having fire for a mother-ashes against her lips-and knives for a father-sharp words in his mouth-did not make for a pleasant childhood.
The Apocalypse isn't amiable.
Small talk isn't his strong point.
Therefore, expect the end of the world to be unexpected and silent, an intruder in the night. You will not even know the time has come until he brushes aside your uncombed hair and whispers, "follow me".
There will be no time to put on shoes or question the scorching heat or the light, that blinding light.
No, there will be none of that. Just screaming to deaf ears.
Running, but to no destination.
The Apocalypse has an advantage because he knows you cannot prepare for the end; you can only accept it.
I always hear the Apocalypse described as scary and unwanted, but never wise.
He is so wise.
He knows that in the end there are no water bottles and extra blankets. Your car will not start and the children won't be well behaved. You will forget the phone you paid so much for and your composure, your priceless composure.
The Apocalypse has learned from eons of experience that during the end of the world there is only the present moment, and you cannot prepare for that.
You can only live in it.

I will admit this much; everything thus far in my life has been handed to me on a silver platter.
But do not be mistaken. That platter exists no more. It has melted into mortality, an unlikely friend in the end. I always knew how fragile life was, but I suppose I viewed it differently from others. I have never seen reality through bloodshot eyes and hunger pangs that devastated me like a natural disaster.
I saw it through wine glasses and diamond earrings. I caught melancholy glimpses of suffering through the tinted windows of foreign cars.
Through my father’s work, I met many of the poor souls who had shaken Satan’s hands themselves. They had the scars to prove it.
Throughout therapy sessions the little children would look down halls and staircases and meet my gaze.
Hubris is a hell of a drug. I never looked back.
It's been thirty one years since those days, and I can see everything now.
I saw the first sign of the end in the form of a local weather forecast. It was already a hot summer, but the heat was rising quickly. Within but only a month, it was heavily advised that no one leave their home. To do so was beyond unsafe; it was officially suicidal.
Since everything rushed in without warning, the world had to survive based on what was already owned.
(But I had everything, didn't I?)
This took a toll on the population. Death was the new trend. It was difficult for the homeless, the poor, families, and almost everyone in between.
By September, humanity was becoming a slave to the sun. There was no official news, only organized insanity people had wrote or documented from their homes. Wildfires danced through society, and took everything in their path into the rhythm. Water withered away to dust. Governments died and were buried by anarchy.
The only law was to live as long as you could.
Anyone would have lost their mind in such a horrid situation.
(But what else was there to lose?)
Now, as I write to you of my experiences I am truly at peace. I lay in my bed immersing my soul in the first breeze I have felt in a few forevers. Strands of hair cloud my vision, but I see light. A gentle hand caresses my skin. There is a warm breath at my back, such as the one of a beast.
(But we’re all beasts of some form, aren't we?)
I pay attention to my heartbeat. It is slow, becoming slower, steadily more so.
My breathing becomes so shallow and so slow; cherish your life because you never know where the apocalypse plans to go.

I am not interesting. There is not much to learn when it comes to the anatomy of the apocalypse.
The first lesson; I was not born out of love and perhaps that is why the word feel like acid on my tongue. I was born out of necessity. The need to destroy. To kill.
To do it all again.
It is my only purpose. I beg of you, whoever finds the remains of this poor soul’s thoughts, I did not ask for my existence as the ultimate end. I wish to feel with these hands burned by fire. I wish to see with these eyes sewn shut. I often fantasize about the singing of angels and the sensation that is humanity.
Humanity, such a strange blessing you are upon the earth. Birth and the prospect of a peaceful death. Freedom. The pursuit of happiness and all the obstacles you fight to obtain it.
The second lesson that everyone should understand; I respect you for being human. I admire you. I love you. I love you so much I've destroyed you with my kiss.
Now my lips speak no more, for my job is almost done. Around me the world has been overtaken by fire. Complex life, centuries of it, lie in ash. Beauty becomes smoke in the air. Everything that once was is no more.
I feel a chill down my spine. I can already feel the harsh words of future life, their accusation and assumptions.
I place all of these words in front of me where flowers once bloomed, and I make friends with them.
Atrocious. Sinful. Horrifying. Evil.
I learn their places in the universe and why they have made their way to the apocalypse, and I hold them gently against me, my eyes damp.
Words. My only friends.
I will take each and every syllable with me to the future.
That leads to the final lesson in life; the end is never just that. The end is always a beginning with another inevitable finish.
So the apocalypse will always loom over you wherever you go. Do not fret. Do not prepare.


Live, because I would end the world time and time again if only to have that luxury.
poem poetry saidbyyou