on October 04, 2016
Yesterday, thousands of women poured into the streets of Warsaw, Krakow, Gdansk, and other Polish cities to vehemently protest a bill that would completely ban abortion in the nation of Poland.

The country, made up of 98% Catholics, already has a fairly strict ruling passed in 1993 as a compromise between liberals and the church, stating that only women that have been raped, incestuous, face major health risks, or experience death of the fetus are allowed to receive the operation.

The bill has already passed through its' first parliamentary vote last week and now awaits approval by a parliamentary commission.

The majority of the current parliament identifies with the Law and Justice party, a decisively conservative sect on the Polish political spectrum which would traditionally favor such a bill. While there are clear supporters within the party, gaining enough votes needed to pass the bill is still unclear.

The bill came to pass through the work of an anti-abortions' initiative within the country. As a result of their work, 450,000 citizens signed a petition approving full forbiddance of abortion, enough needed to create a proposal to be received and investigated by parliament. While 450,000 may seem like a great many, 38 million individuals make their homes in Poland, and today, those numbers showed. Thousands upon thousands of Polish women, and even some men, left their occupations to partake in the protests, 25,000 in Warsaw alone. 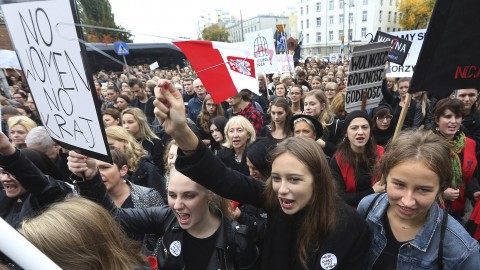 “It was not an NGO." Marta Szostak of the the Central and Eastern European Women’s Network for Sexual and Reproductive Rights and Health said. "It was not a person who’s been fighting for women’s rights to abortion for many years. What’s happening now is more a civil movement, a grassroots movement — because women are very furious. They’re very scared.” 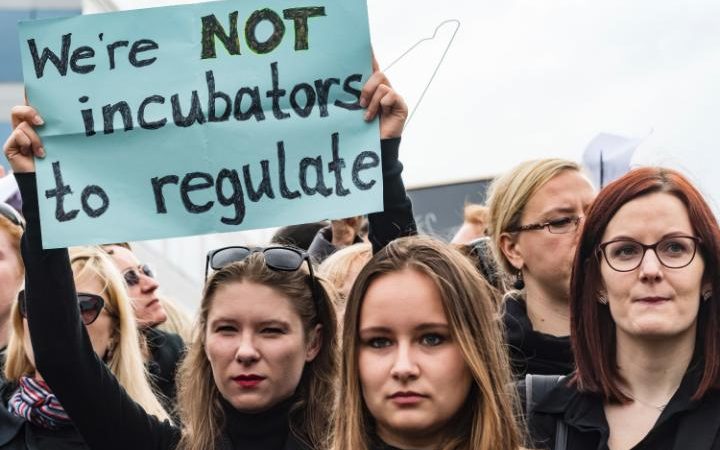 (Photo courtesy of The Telegraph)

The European Parliament is scheduled to debate the issue in a session on October 6th, and pro-choice activists are hoping that the governing body will repeat its' past actions (reprimanding Paraguay for enacting similar restrictions to Poland's proposed anti-abortion bill).

Throughout social media, posts and hashtags such as #czarnyprotest and #blackmonday have been circulating, displaying a myriad of photos and videos of Polish individuals taking to the streets, and fighting for their cause. 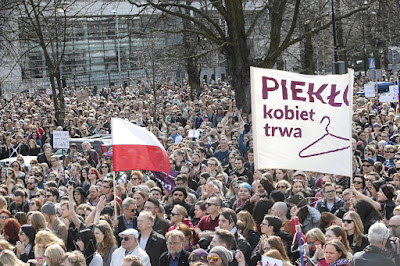 (Photo courtesy of The Independent)

In the upcoming weeks, the Polish and European governing bodies will be making decisions that will not only affect Poland, but potentially the world as a whole. Will an upholding of the bill spark harsher regulation in other countries? Will the six country list of equally to more strict abortion rulings dwindle to five? As the world collectively holds its breath, millions of Poles stand ready for the worst and hope for the best. In this time of uncertainty, it’s important to be thankful for the better situations countless countries worldwide enjoy, and hope for the same future for kindred Poland.