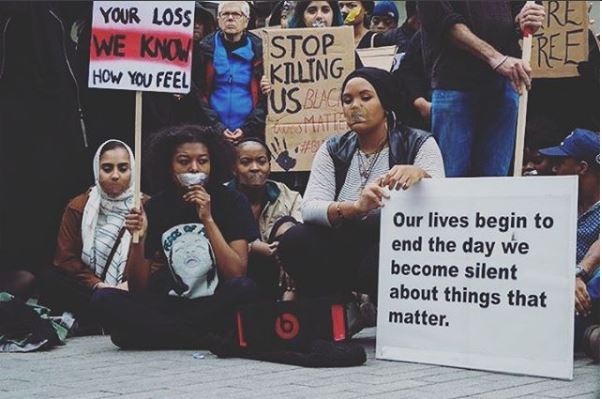 A spoken-word poet, a writer, an intersectional feminist workshop facilitator, an activist, and the organiser of Birmingham’s Black Lives Matter protest: Aliyah Hasinah can do anything. The young Birmingham-based activist is making a difference on local, national and international levels. I spoke to her in person to find out more about all of the incredible things she is doing…


In July you organised our city’s Black Lives Matter protest in two days, with your friend Olivia Brown - how did you do that, and how did you do it so quickly?Myself and Olivia both have backgrounds in marketing, so that came in really handy when trying to circulate it! Olivia initially came to me with the idea, she said that she had a dream, that she saw people with tape over their mouths, listening to Kendrick Lamar with placards for Black Lives Matter. This was just after Philando Castile and Alton Sterling were killed, so tensions were high and there were a lot of emotions, and we were essentially all mourning for them. At first, I was like, ‘Yeah, okay Olivia’,because it was a lot to take in, but then I called her back and was like, we have to do it right now, let’s organise it for Saturday. Then in two days, we just marketed it everywhere. The day before the protest, we set up a [plaque-making] session so people came and made plaques down at Impact Hub in Birmingham. On the day we all went up in the morning from Impact Hub, blasting music, and within 15 minutes there were like 100 people there and it just kept building and building until over a thousand people turned up.

Aliyah has curated an exhibition called Black Lives Matter Brum. The exhibition's launch will be on the same night as her event, Herstory, and in the same place in Digbeth, Birmingham, . You can find out about both of them here.
activism aliyah hasinah interview racism vita