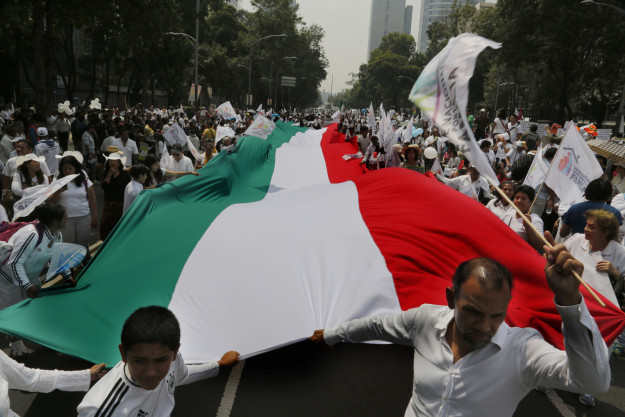 Tens of thousands marched in the September 10th protest of the furthering of
LGBTQ+ rights on a national spectrum in the nation of Mexico. Photo courtesy of Marco Ugarte / AP.

In early September thousands of Mexicans, walking under the conservative-leaning, anti LGBTQ+ organization, The National Front for Families poured into the downtown areas of Mexico City, Guadalajara, Ciudad Juarez, and other Mexican cities, donned in blue, pink, and white, banners in hand, and message clear: We will not let you make same-sex marriage legal.

After a proposal detailing Mexican President Enrique Peña Nieto’s support of same-sex marriage and provisions within to legalize the act nationally was released, initial support and enthusiasm by many Mexican LGBTQ+ activists was high, but the hard facts of the situation, and the poorly orchestrated content of the proposal hit home all too soon, eventually sparking the September protests, of which gathered an international spotlight, and displayed on a world stage, the harsh reality of Mexican politics.

In Mexico, members of the LGBTQ+ community have been able to marry in the capital Mexico City since 2010, and others have won the right to do so in many other states through various quietly introduced lawsuits. But due to complications in Mexico’s legal system, only the individuals who had brought the cases are allowed to carry out the fruit of their labors, while other subsequent couples must carry out a suit of their own to achieve the general goal.

Fortunately in recent years, more and more judges have started ruling in favor of marriage equality and after multiple cases concerning the same subject matter, the ruling can be transferred to all those who fall under the umbrella of the case’s issue and effectively rant the right to marry to every individual in Mexico, but not if opponents of same-sex marriage in Mexico have anything to say about it.

President Peña Nieto’s document was released in May, at a time when his support was at an all time low of 30%, and would immediately bring about a declaration by the President’s own party, that the proposal would not be considered by the government’s legislative branch. In addition, it would bring to light the numerous victories for the LGBTQ+ community in the nation's court system, and subsequently garner the notice and backlash of various religious organizations and influential leaders of the Catholic church, including Pope Francis himself, who supported the September protests after the fact.

Finally, the climax of Mexican same-sex marriage opposition would occur on September 10th, bringing massive crowds into the streets of some of Mexico’s largest cities with the goal of halting and ceasing all action benefitting the marriage equality movement heavy in the protestors’ minds. 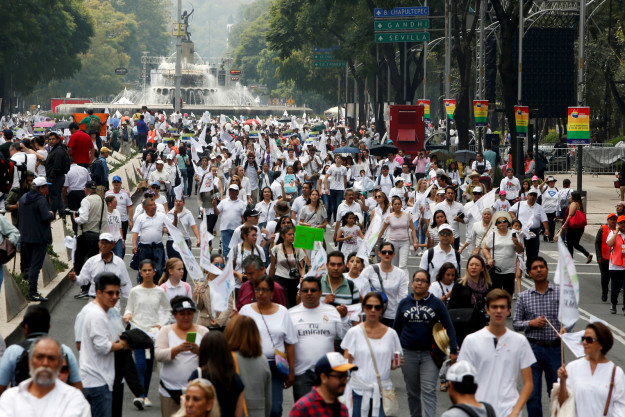 While the situation for the LGBTQ+ community of Mexico may seem to be following a negative trend as of late, forces are at work to piece a strong movement for equality together. A senator of the left-wing Party of the Democratic Revolution announced after the collapse of the President’s proposal, that he would be introducing another bill regarding marriage-equality, with its’ contents clearly detailing the full right to marry for all Mexicans over eighteen, "without any discrimination on ethnic or national origin, gender, disability, social status, health conditions, religion, sexual preference, or any other discrimination that violates human dignity.” The National Pride Front also announced soon after the initial protests that they would be hosting their own protest the day after the original, forecasted to draw thousands.

With the guidance of influential politicians within the Mexican government, and the work of numerous LGBTQ+ organizations within the country, the outlook for Mexico’s LGBTQ+ community is not far from hopeful. With a little luck, the tables could turn for the best once and for all, and until then, be sure to keep a look out for the wave of change sweeping the world and forever changing the lives of countless worthy individuals.