Stranger Things: Breaking It Down, Just Like How it Broke Us. 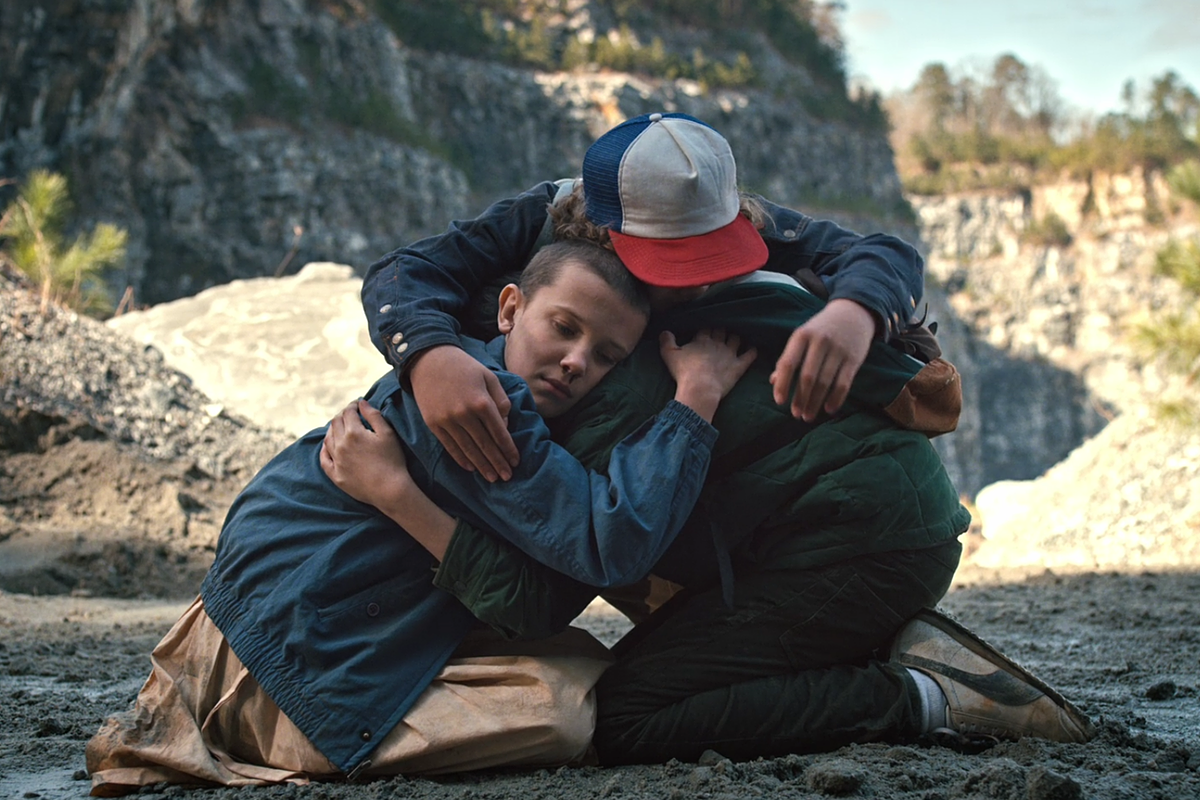 Calling all conspiracy theorists, superpower geeks, suburban rebels, and alien lovers (I didn’t say believers because anyone who doesn’t believe in aliens is an absolute F O O L!), a new show has come to save us from responsibilities. Netflix has come to our rescue again with another epic series called Stranger Things. For those who haven’t watched it yet, exit out of this post, watch the season, THEN come back so we can both totally freak out about this. And for those of you non-believers of how absolutely nuts this show is, I’ll try to sum it up in the best way possible: An alien tries to survive, despite the government disturbing it, in a totally unrealistic suburban setting where about 30 people live. We meet tiny science geeks, the rich kid, the princess, and the dude who ALWAYS has a mysterious background, a mutant, mean kids, oh and don’t forget the science teacher who is dedicated enough to science and his students that he will pause a date and pick up the phone at 10 PM to answer questions Google can’t answer yet. This post WILL contain spoilers, so if you haven’t started or finished, well what are you waiting for? Go finish! I’m going to break (almost) every aspect down and by the end convince you why Stranger Things is a must-watch and must-recommend.


CINEMATOGRAPHY:
For anyone who enjoys intricate details within visuals, Stranger Things wisely uses camera angles, point of view, and movement of not only people but inanimate objects as well. The Duffer Brothers utilizes zoom to add emotion and impact on the scene. ZOOM IN: Intimacy between characters can obviously be seen in their faces, but body language is also a big indicator of how characters feel about each other, whether their movements may be conscious or not. ZOOM OUT: You can see the way characters look at each other when who they’re looking at doesn’t notice, is anyone else a sucker for that or is it just me? 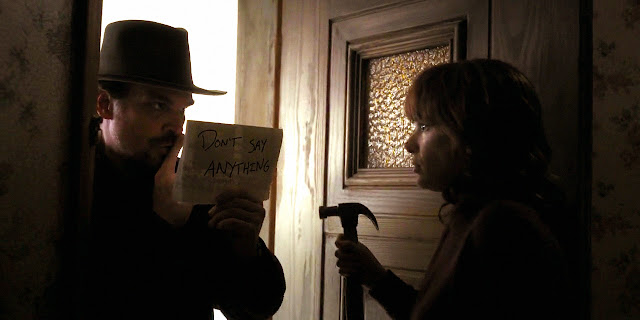 Often times, people get confused on what tone the directors are trying to portray, lost between bad choices in music, wrong angles, and wrong focus, but the Duffer Brothers absolutely perfect it. The tone transcends the screen and comes to life right where the viewer is. The eeriness, anxiety, fear, passion, and determination are emotions not only the characters feel and portray but, if done well enough, the viewers embody exactly how the characters feel. With Stranger Things, you are a living breathing character going through the motions within every scene. 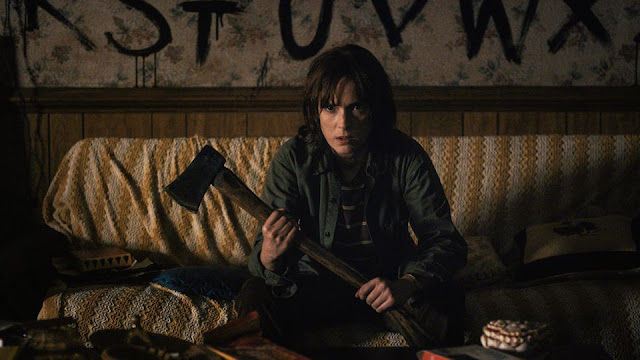 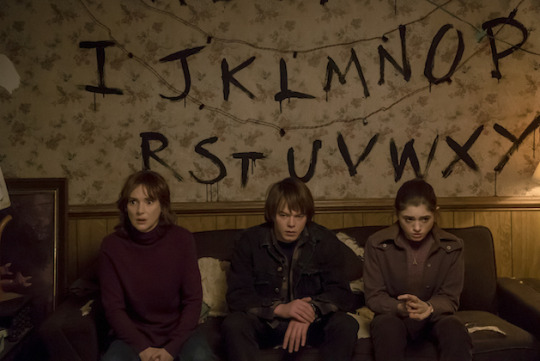 CHARACTER DEVELOPMENT:
Onto the basics, Stranger Things only has 8 episodes but is jam packed enough to give series with 9 seasons and hour long episodes a run for their money, and absolutely win. In those 9 seasons, characters gradually grow up, although sometimes they stay absolutely the same, but in only eight episodes, I have witnessed some of the most genuine character development within characters.

Let’s talk about our favorite suburban rebel, Nancy Wheeler. Nancy will do absolutely everything to become anything but her parents. She first falls under the spell of the stereotypical popular high school boy, Steve. Going through the motions of whether he’s the “right one” or not, with the help of Barbara (in the not so best way possible AKA going missing, and well, you know…), Jonathan Byers, and a monster, she realizes buying a top or a bra a boy MIGHT like, might just not be the most important thing out there. She has trouble balancing the Princess Act between having fun and saving her best friend, but the gag is, you don’t have to drop being a princess to be an absolute badass when you can be both. Nancy’s character explores the (virtually non existent) social construct of virginity, slut-shaming, the pressure of being who people want her to be and still finding out who she, herself, wants to be, and the realization that people are beyond stereotypes and labels.

Here we have the mascot of every coming-of-age film, book, and show, but we soon find out that beneath the costume is something more. Steve is the classic playboy, jerk, you name it, but as the show progresses, the audience comes to discover that just like every teenager out there, Steve is just someone who needs a little guidance and can’t find it. He is someone who has a toxic group of friends, who he fits right in with until (cue the corny music) Nancy. With falling in love comes the classic epiphanies, and Nancy has shown him that people can be good and have empathy for people other than themselves. Steve goes from the boy who just wanted sex and broke Jonathan’s expensive Pentax
camera for petty revenge, to a boy who stood up for himself and left people who didn’t deserve him, went to the to the Byers’ residence to solely apologize to Jonathan, and stayed to protect other people, when he had the chance to run and keep himself

safe. He even goes as far to clean up the slut shaming sign on the movie theater. Steve shows that totally crappy characters can be something other than the standard villain, that people can learn and grow from mistakes, and that’s why I now have a soft spot for Steve, because he is as dynamic and fluid as the viewers watching him on their screens.

Hopper, from the beginning, comes off as a cop who doesn’t really care about his job. He writes off Joyce Byers as a “nutjob” undergoing the regular process of grief, trying to bargain with her own mind that her son is still alive. Hopper then begins to

uncover every clue hidden under their noses and risks his life and sanity multiple times in hopes to find Will Byers. Hopper, at first, seems like a flat character, but he wears not only the badge as chief, but also as the show’s token mysterious character with an enigmatic backstory that we’re all itching to find out.all itching to find out. From apathetic to filled with determination, we see one of the biggest changes in Hopper. With every flashback and change in emotion, we’re all on the edge of our seats, waiting for Season Two to get some answers. 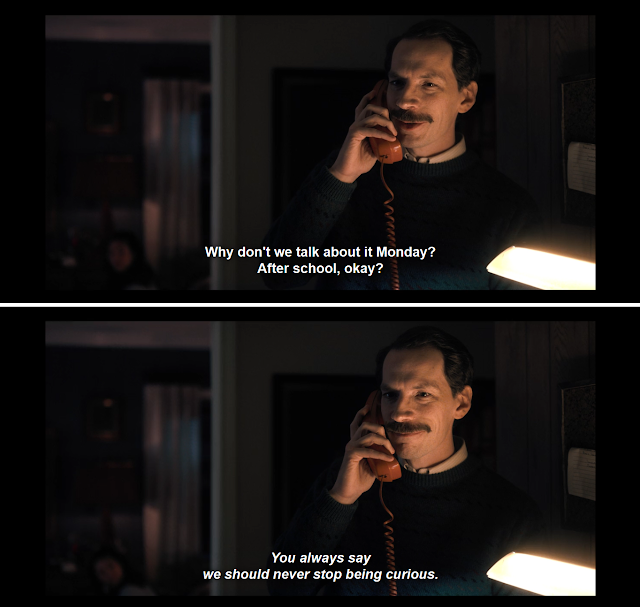 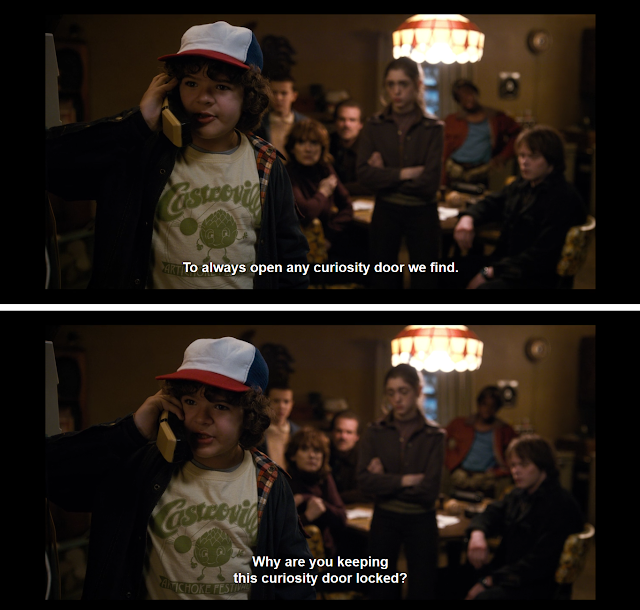 As someone who was once a science enthusiast my enthusiasm for science has been lost over time through endless paragraphs, stacks of packets, and not enough application. But, Stranger Things has somehow sparked the fire ablaze once again. We see science theories beyond the theory and into application. To suburban science geeks with not as much access to materials, seeing science in action, AKA the sensory depravation bathtub, look so possible to create, has my jaw hanging open. I’ve forgotten how fun and interesting science could be and I am grateful that this awesome gang of kids and (extremely devoted) science teacher could bring the fun back to something that for many of us has become so dull. Now, let’s talk about that acrobat and flea theory. HOW COOL IS THAT! I’m still wrapping my head around the whole thing and it’s just not happening. Do you think in another dimension, we are capable of being the flea and not the acrobat?


FEAR OF THE UNKNOWN:

As humans, fear is something that is wired into our system. From instincts like “Fight or Flight” to “Should I really go the bathroom after watching that freakin’ horror movie?”, fear is an emotion that is inevitable to mankind. We have proved time after time to ostracize and hurt concepts that we do not understand. Stranger Things explores the two sides of how people react to the unknown with the characters Mike, Lucas, and Eleven. Mike takes a liking to Eleven and gives her the benefit of the doubt with her powers while Lucas automatically assumes that Eleven is a monster because he doesn’t trust the extent of her powers and what she can and wants to do with it. Which character would you be?

IF WE CAN, SHOULD WE?

Ah, the age old question. Stranger Things explicitly explores the question of the abuse of power by the government. We, as a society, are now technologically advanced and are able to do certain things, but just because it’s possible should we? Ethics comes into play when trials and experiments are conducted. In Eleven’s case, is it right that a child was taken from her mother and emotionally and physically abused with each test done on her if it meant her abilities could do the world some good, or even save the world from future catastrophe? Let’s put the eeriness, aliens, and bad government guys aside and focus on how the themes of friendship, family, and trust have shaped the show’s first season. At its core, everything in Stranger Things has been possible because the protagonists have prioritized their friends, family, and the virtue of trust. Every friendship and family in the show has been put to the test and with every test, they pass with flying colors by trusting one another.

Trust is something that is hard to give and hard to earn back, and the show portrays that perfectly. Joyce gained the trust of Hopper and Jonathan (and vice versa), therefore they were able to move forward from the “funeral” and tackle the obstacles along the way. Lucas was able to trust Eleven, right in time, to warn them of the evil that was coming. Mike and Dustin- who have incredible trust issues by the way due to theories (relatable)- were able to trust Nancy and Hopper to be telling the truth. If everything was at stake, or even if it wasn’t, who would you be able to easily trust with your secrets and your life? Just some food for thought.

[*Nudge Nudge* Leave your toxic friends just like Steve did!]

Of course, Season One means a genuine happy ending is far from our reach. While the Boy Who Lives is back at home, he is not the same boy who left, but he sure is quite the actor! During the joyful season of Christmas, the setting is light and elated, but there is an underlying sense of unrest and worry within the town of Hawkins. While Jonathan just got a new Pentax, Will is throwing up some slugs. While Joyce is cooking some runny mashed potatoes for her family, Mike is feeling the emptiness of his basement. And while we just want some peace and quiet in our lives after the season finale, Hopper puts some Eggo’s in a box in the woods leaving us to lose every piece of harmony and dignity left from the roller coaster these 8 episodes put us through. There are still loose endings left to tie and I can not wait to bunny ears the crap out of them! Leave us with some theories and questions, because you already know I'm going to reply faster than the speed of light.