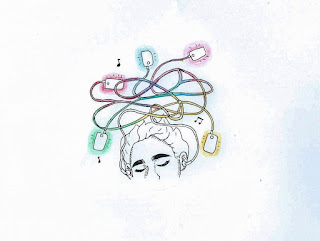 It seems that sometimes, infamous musicians can not partake in just one musical project/band.  Some explore new genres that differ vastly from what they are used to, while still incorporating the distinct sound of their original style.  Other artists, who prefer to dip their toe in a new style rather than totally immersing themselves into it, will team up with artists from a different genre to create a unique sound for just a single track.  Still others find it necessary to take on the challenge of creating music outside of their normal genre head-on; entire bands are formed, usually from members of existing groups, for the sole purpose of exploring new musically boundaries.  “Two-Voiced” explores popular artists and what their unorthodox side projects have to offer.

Big Grams: Fell in the Sun - Big Grams is the collaborative project of rapper Big Boy and electronic rock duo Phantogram.  Rather than one of the two parties’ sounds having an obvious influence over the other, their music evenly combines the two styles, which go with one another quite brilliantly.

SBTRKT & Ezra Koenig: NEW DORP, NEW YORK - Vampire Weekend’s lead singer Ezra Koenig took a walk on the wild side for this funky track!  With a tuba bass line peaking out over the otherwise entirely electronic instrumental, this song is truly a jam.


The Dead Weather: I Feel Love (Every Million Miles) - The Dead Weather is an all-star team of musicians: the notoriously cranky Jack White and Kills singer Alison Mosshart just to name a few.  Each musician brings a unique aspect to this old school-sounding rock band.

Prophets of Rage: Prophets of Rage - Consisting of three out of four members of punk/alternative metal band Rage Against the Machine, two members of old school hip-hop group Public Enemy and B-Real of Cypress Hill, Prophets of Rage is an honest-to-goodness musical powerhouse.  I had the absolute pleasure of witnessing a live performance from these guys, and let me tell you, I was completely blown away.  They performed songs from all 3 groups that the members originate from, and absolutely destroyed my eardrums (in a good way)!  As they have almost no songs produced as Prophets of Rage, the link will be a live performance, but is nonetheless worthy of a listen.

DJ Shadow & Run the Jewels: Nobody Speak - Some of you may know Killer Mike as not only one half of alternative rap duo Run the Jewels, but also as one of the creators of “Bank Black” movement, a revolutionary and widely-successful movement designed to bring money and prosperity to black-owned businesses.  Aside from this, Mike and LP, the complete RTJ duo, have proved themselves to be extremely versatile rappers, such as in the DJ Shadow track “Nobody Speak”, where rap and electric guitar riffs and hip-hop are expertly combined.
NOTE: I especially recommend viewing the YouTube video for this one, it’s quite amusing!