GIRL MEETS WORLD: What We've Learned From Riley and Maya 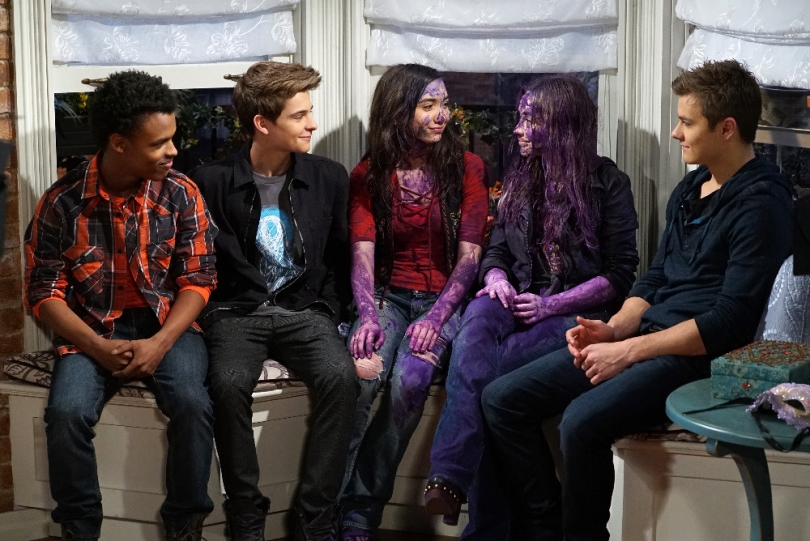 “Who am I?” is a question packed with infinite answers, but for some reason none of them just seem to fit. Finding yourself appears to be mission impossible, factoring in the fact that so many people seem to be set for life (which is false), but alas we remember that we are not alone in this journey. Riley Matthews (played by Rowan Blanchard) and Maya Hart (played by Sabrina Carpenter) climb on the same train we are on, struggling to answer the same questions, with uniquely different methods, on Disney Channel’s show Girl Meets World. The two girls, their friends, and family tell their tales of triumphs and losses set in their teenage years, reminding us all that the answer to the million dollar question, is not just one answer, but perhaps all of them as time goes on.


For guidance and survival, having a support system is essential in one’s life. Without a solid support system, people are left to deal with physical and mental challenges alone, and while independence is a wonderful asset within an individual, human nature indicates that sometimes, we just need someone to be there for us. Friendship is one of the most critical bonds to form over time. With friendship comes trust, loyalty, encouragement, and essentially a second family. Riley and Maya have found that within each other ever since they’ve met. Riley helps Maya build more trust and optimism towards the world, while Maya helps Riley to be more realistic and confrontational with the world. In a healthy friendship, balance should always be evident.

The Girl Meets World gang extends from solely Riley and Maya (who are ULTRA best friends) to Riley, Maya, Farkle, Lucas, and eventually Zay and Smackle (who are SUPER best friends). These five teenagers see the absolute best within each other and will go to the ends of the Earth to protect one another, even if it might mean sacrificing themselves. Genuine friendships help you discover and believe in yourself, while saving room for each other to grow and develop as people, which is exactly what these group of teens do. With each hoop, they individually, and sometimes as a group, have to go through, they never fail to keep each other grounded, safe and sound. A true friendship is not always invulnerable from harm, but if the bond is strong enough, it won’t break.

The concept of good and evil has been debated by the earliest philosophers known to mankind and now to millennials on Twitter. Are humans by nature, good or evil? With each episode, the show tackles this beautifully, either blatantly or subtly. Good is usually embodied by Riley (and Lucas) while evil is usually portrayed by Maya. Maya struggles with her rough past and identifying herself as a “good person”. At one point, she believes that once a person has gone down the wrong path, they can never make their way back. But, her family and friends show her that with right people around, anything is possible. Girl Meets World displays that there is no person purely good or purely evil, but instead a person can be influenced day to day by their environment, upbringing, and eventually and individual choice to act kindly or destructive. Many people tend to forget that a good person can make bad choices and can continue to make them or change for the better, but other factors definitely come into play.

Having a strong role model to look up to can be a monumentally great thing. For Riley, Cory and Topanga have always been a source of support and inspiration. They teach her how to grow into a kind and selfless person. Cory and Topanga give time to those in need, and are exemplary citizens. In reality, it is not common to witness such acts of good, or have such a strong role model in your life. When those moments and people to arrive, however, it can feel daunting. You feel an intense pressure to leave your own mark, and outshine those role models. Riley faces this pressure in the episode “Girl Meets Cory and Topanga”, as she learns to appreciate and admire how truly good her parents are. They stay up into the late hours of the nights working to selflessly improve the lives of others, and Riley fears she will never live up to that. Often, people become obsessed with leaving their mark on the world, fearing a legacy will never be made. I (Claire) have two older sisters, and one of the strongest women on the planet for a mother. I feel for Riley when she sits, basking in her parents greatness, fearing she will never be the same. Feeling like she will come up short, and let her idols down. Ever since I can remember, my sisters have known exactly what they wanted to do with their lives. Meanwhile, I struggled with finding a path and a place in this world. It took me a long time to realize that I don’t have to fill their shoes, I just need to work hard and do as much as I can. Riley too comes to this same realization, and finds comfort in knowing her parents will always be there to support her as she explores the world looking for her own way to leave a mark on society.


As we age, and start growing into our teenage years, our personality changes with us. When I (Claire) was 13, I was an introverted, and would have rather stayed in my room listening to One Direction and reading than go to a social event. Now at age 18, I have become increasingly extraverted, and jump for the opportunity to meet new people and have new experiences. I’ve changed, a lot! In high school, I was always known for being shy, even when I had outgrown my image, that is how my peers continued to view me. It was confusing and conflicting, as I realized I was stuck in this one personality. Moving to college, I had a fresh start, and met all new people. Now, if you asked one of my professors, I would bet they would say I am one of the most talkative and interactive people in the class. Moving up to a new school allowed me to reinvent my image, and I didn’t realize how liberating it would be. In the episode “Girl Meets Secret of Life”, Lucas explores his own change in image. An old friend from Texas arrives, and it is revealed that Lucas was a much more violent person, which leaves Riley questioning Lucas’ true personality. Lucas was a different person when he lived in Texas. He was seemingly more aggressive, but still had a good heart. When he moved to New York, he had the opportunity to leave that negative part of him behind. At first, Riley sees this as Lucas trying to lie to her, and pushes him away for it. She soon realizes that it doesn’t mean he is a disingenuous person, only that he has moved on from the past and no longer views himself as that same person. As we grow, our personality and self image inevitably change. The characters of GMW prove that if harnessed correctly, this can be a positive opportunity.

From a superficial perspective, Girl Meets World might seem like a silly show for kids, but when inspected with a closer eye, it's clear that is not the case. Girl Meets World conquers the questions almost every teen is thinking, all while promoting good ideals and morals. Riley and Maya make wonderful role models for growing girls, and provide hours of entertainment for a variety of audiences.
claire girl meets world jazmine showbusters tv show review