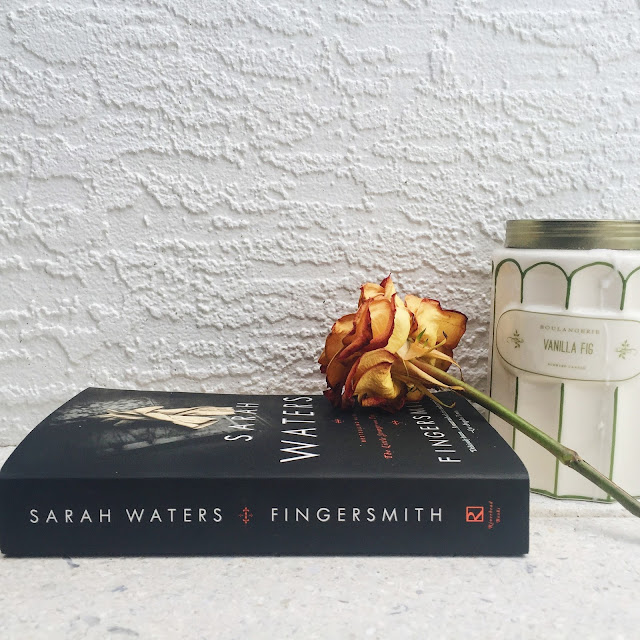 "The more I tried to give up thinking of her, [...] the harder I tried to pluck the idea of her out of my heart, the more she stayed there."

Fingersmith by Sarah Waters follows a 17 year old girl named Susan Trinder as she works to help a man named Gentleman seduce a young heiress, living with her uncle in the secluded Briar, for her fortune. Gentleman and Susan are fingersmiths, which is Victorian London slang for thieves. Susan, raised by her adoptive mother Ms. Sucksby alongside other fingersmiths, is to be the maid for Miss Maud Lily, gain her trust, and convince her to marry Gentleman so he can gain control of her inheritance. However, things don’t go quite as planned.

When a friend recommended this book to me, I was already hooked. I love stories about thieves and I love historical fiction, so this book and I were a match made in heaven. My friend had hinted toward a happy ending, and I was so excited because there’s a disturbing trend in the media regarding the treatment of LGBT characters. That is to say, they are either underdeveloped or killed for shock value in the case of lesbian characters, so it is refreshing to read something where the characters do find some sort of happiness.

Waters’ writing style is absolutely captivating. She effortlessly captures Victorian-era England with slang and dialect that immerses the reader into the story. The split narration gives readers a sense of both girls, and Waters does an amazing job creating unique voices for them. This book did not leave me bored for a second.

To make it even better, in 2005, Fingersmith was adapted into a mini-series, and now, Park Chan-wook, known for films such as Oldboy and Stoker, is adapting Fingersmith into The Handmaiden, which will be set in 1930s Korea during the Japanese occupation.  It’s been referred to as a “Korean GothicLesbian Revenge Thriller” and is set to be released in the United States on October 21, 2016.

So, if you enjoy historical fiction and well-written LGBT characters, this is the book for you. Happy reading!

Review and Photo by Simone