DC’s Very Own Vessel: The Grand Opening of The National Museum of African American History and Culture 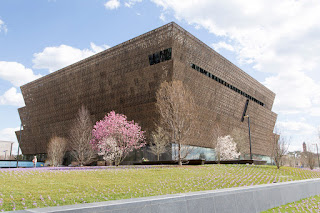 
Next week will mark the opening of a much awaited cultural site, The National Museum of African American History and Culture, sitting on an expansive 5 acres along Washington DC’s National Mall.

After 13 years of construction, the hazy brown structure is unlike any of it’s neighboring museums, and is intended to carry traces of Western African architecture. The museum’s 3 history-themed levels span the course of pre-European slavery to the 1968 March On Washington, which is the historic site visible from the entrance to the museum. There is even a level dedicated to more modern day African Americanism, with odes to such figures as Anita Hill, who fought a corrupt justice system, and the Black Lives Matter movement. Perhaps most raw of all, though, is the casket of Emmett Till, held in a closed-off room separate from the rest of the exhibits. Additionally, a grief counselor was hired to work at the museum to assist with some of the more graphic artifacts.

In the gallery section, politics come into play, which is what
opponents of the museum didn’t want to happen. Featuring African
American art pieces like “Mothership (Capsule)”, which uses
artifacts from President Obama’s past inaugurations, the message isn’t politically aligned one way or the other, but rather aligned with the triumphs and struggles of African Americans in US politics over the course of 300 years. The goal is for  the museum to embody history for what it is, a never ending string of events, and that more and more can be added through the years. When people enter this beating heart of a race so blatantly oppressed, they will see Chuck Berry’s red cadillac convertible, Emmett Till’s casket, and everything in between, and hopefully walk away from the experience a more empathetic and aware person.