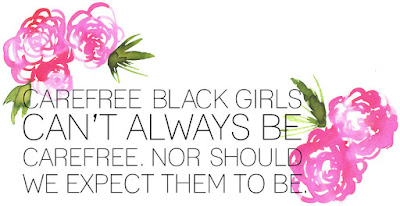 
My Instagram feed is slathered in Black Girl Magic. It seems like everywhere I look, my eyes tear up because there are just so many beautiful, black and brown skinned women who are completely unapologetic. They are glowing, confident, unbothered Black gals who fit the “Care Free Black Girl” genre we’ve created for them. This label is culturally notable because for centuries, Black women have been referred to as “the slave’s slave” and “work horses.” We are associated with battling the burden of racism and sexism in the outside world, as well as in what is supposed to be the comfort of our own homes. Thanks to pop culture, the image of the Black woman in America is one painted with depression, abuse, and an overall sense of hopelessness. A new image of Black women to emerge — one that celebrates our vivacious soul— is monumental and worth celebrating.
When I went to the Broccoli City music festival in Washington D.C this past April, I was truly amazed. Never before had I ever seen so many Black people in one place. As a San Diego native, where the percentage of Black people falls just below 7%, it was so incredible to be surrounded by beautiful people who look like me. For the first time, I saw these CFBGs jump out of my phone screen and onto the same ground I was standing on. They were living, breathing, and real-life people. I remember looking around in awe as my vision was clouded with blurs of dashikis, colorful head wraps, and Bantu knots everywhere.
My amazement didn’t last as long as I’d wanted it to because within a matter of minutes after getting through security, I felt a familiar feeling tugging at my heart. Anxiety is an anchor, not in the sense that it keeps me grounded, but because it weighs me down. I become tethered to it as it yanks me down, leaving my happiness in the air. When anxiety is paired with its best friend, depression, it is very easy to take my heightened excitement and turn it into misery. And once that happened, I felt certain I could never be a CFBG if anxiety and depression continued to take the reigns on my life.
Philogynoir, a Black YouTuber who discusses race and gender politics, broke it down very clearly. In her video “Why I’m Not a Carefree Black Girl,” published in June, she argues that being carefree as a Black woman in America is a luxury. Socio-economic class can really make or break whether or not a Black women is afforded the privilege of not having any worries. Later in the video, she compares the CFBG archetype with more oppressive stereotypes like the Jezebel, the Mammy, and the Welfare Queen. All of these one-dimensional narratives have been used as justification for the disrespect of Black women, so when the CFBG to enters the picture, it seems like a “form of respectability politics.” Are CFBGs “better” than these historically oppressive stereotypes?
It isn’t so much the idea that individual Black women who identify as “carefree” believe they are better than Black women who don’t. The issue rests on the image of a CFBG and the cultural associations that come with it. Realistically, Black women have a shit ton to worry about. Racism and sexism in America are so strong that it’s almost palpable. However, I don’t think that the CFBG narrative does not hold that all Black girls everywhere are anxiety free all the time. It is unrealistic and damaging to the way we view Black people. Perhaps put best by Jesse Williams in his BET acceptance speech, “just because we’re magic doesn’t mean we’re not real.” If we are going to embrace the CFBG narrative, we cannot afford to gloss over the unspoken imperfections that accompany this image.
But like any kind of Internet persona, we’ve molded it and watered it down and stripped it of its humanity. We’ve erased the possibility that CFBGs are indeed human beings with their own sets of problems. Assuming that there is no place for Black girls with anxiety within this community of CFBGs is a dangerous act of erasure. The Black community already suffers immensely when it comes to talking about mental health. We can attribute this to a long history of masking emotions, valuing dishonesty as a means of survival, and having “more important things to worry about.” I applaud the world of CFBGs and encourage them to continue to inspire us with their attitudes, but caution the erasure of the mental health discussion.
Similar to many other girls in my situation, I am slowly embracing what two forces influence me to be who I am. I am not an unbothered Black girl. Instead, I am anxious, constantly waiting for something to go wrong. I doubt myself often and let little voices in my head tear my self-esteem into shreds. But while all this is true, I am happy. I enjoy basking in the sun. I am grateful for my melanin and content with my Black features. After years of ridicule and yearning to see girls who look like me on billboards, I am happy with my Blackness.


The CFBG trend does not have to be a new source of competition among Black women. With colorism still rampant, the Black community has been divided enough. If we choose to accept the CFBG narrative, which I believe full-heartedly we should, we cannot run it to the ground with generalizations, mental health erasure, and competitiveness. To be carefree, even for a moment as you type it “#carefreeblackgirl” on your Instagram caption, is liberating and empowering all at once. There is a way for anxiety and other mental health issues to exist within the CFBG community, because even the most carefree Black girls are as human as anyone else.