Theatrical and Queer: An Interview with Kate O’Donnell 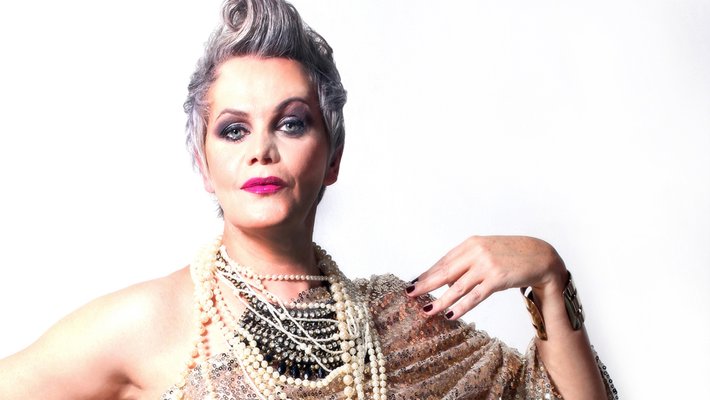 An interview by Vita Aaron Pearl

Kate O’Donnell is an exceptionally cool person and queer performance artist. Her show is honest, captivating, hilarious, and keeps the audience unsure as to whether they are going to burst into laughter or tears.  I had the chance to ask Kate about her show, trans identity, and what’s next for her...

How would you describe your show, Big Girl’s Blouse,  to someone who has never seen it?
It's pretty theatrical and queer...which is how I roll and part of who I am! It's an autobiographical show about growing up in the 70s and being a trans kid when no one knew what trans was. I chart my coming out over the last 35 years and pretty much make a song and dance about it!

How did your show come about in the first place?
I have been a performer most of my life and involved in theatre. A few years ago, there was a lot of homophobia and transphobia going on - especially in Russia - and I wanted to stand up and be queer,  so I used what I have: my creativity and and queerness. Put them together and we get a show! I put a lot of me out there, as I wanted people to not feel ashamed of who they were or had been. I had been a fem boy, a gay man, a drag queen and a trans woman. Sometimes we are made to hide those things. I wanted to celebrate them and raise trans visibility; I wanted an uplifting show - much about trans stories are negative. Hence the hashtag campaign: #standbyyourtrans. It's helped me be more out and I have witnessed young trans people come out after my show, which is where the social change element comes in. It is very exciting and worthwhile.
You talk a lot about your childhood, your past - what is it like to share some very personal parts of your life with the audience?I feel so much time has passed and I have had lots of therapy to deal with a lot of my past. I don't feel sad or angry or upset about it now. This means I can step back and present my childhood comfortably and find the humour in it. People say they laugh and cry at my show and I think that's the right reaction as my childhood was a mix of both. What is the hardest thing to talk about in your show?Well, the bit I struggled with was showing pictures of me as a teenager. I was a spotty boy  and had a really big jaw -  I needed 3 jaw surgeries to correct it. So it was a difficult part of life. People called me names and it's not the time of life when you want to stand out. So showing those pictures of that time is very exposing… and often met with gasps… but I am glad I included them, as it’s my commitment to not hiding my past. I have grown to love those teenage pictures during the tour.

What does #standbyyourtrans mean to you and how do you want it to be used?#Standbyyourtrans has come to mean lots of things - it's a call to action, a celebration, and a way to show support.  It’s out and proud. It’s also a direct reference to a song in the show. People have gotten  on board with this hashtag campaign.We sell t-shirts with it on and the money goes to the  children's trans charity Mermaids, which supports trans kids and their families. It was also a way to tap into the digital community, and raise trans visibility virtually, and reach a different group of people maybe younger people?

What do you think are the best things people who want to be allies to the trans community and #Standbyyourtrans can do?
Be interested, get to know the language, stick up for the gender non conformists, the trans, the non binaries -  argue on our behalf, back us up - it’s very sexy when you do!   Also acknowledge that we are all on a gender spectrum, or as my friend says, in a  gender soup. It's not trans over here and everyone else over there; there is a lot in between.  We all bring something to the gender table. We need to encourage discussion, disruption, debate - especially around gender binaries...they’re so last year darling! Be aware that with trans visibility comes trans vulnerability… as we speak up, we are also knocked down. I have met the most amazing trans people this year, from 8 to 80 and I learn from them about life and hope and strength. You can all do the same - #Standbyyourtrans!
The internet has allowed for education on topics not accessible to many teenagers before, which has contributed to more teens identifying as transgender. Many have continued to identify this way, others haven’t. Of course, gender and sexuality can be really confusing at any time of life, but particularly in teen years. Can transgender identity be fleeting - what are your thoughts on this?I think for me transgender was invisible growing up so I didn't get it or understand it  I may have transitioned earlier if I had had the internet. For me, it took till I was in my 30s when a friend transitioned. Back in the day,  anything written about trans was negative and sensational and not something that you would want to explore. I hope exploring gender and sexuality is easier now and if it sticks then it's right if not then move on...no harm will come to you exploring things.
Do you have any advice for trans teens or teens that are exploring their gender identity?From working with the young people's charities Mermaids and Gendered Intelligence, the key thing is getting support and backup from friends family and the trans community. This is not always easy and in some families it can be difficult, but being isolated is worse. There is a high level of depression and attempted suicides in the trans community so get help and let someone know before you reach that low point.
I think the drive to explore gender and find your gender is very strong and you need that drive to get through some tricky bits. I always say transitioning is a series of awkward and embarrassing moments but it's all worth it if you get to be you.
I transitioned over 14 years ago when things were still underground and hidden. I think now is an amazing time to be trans, possibly the best time - more people get it, [there’s] more positive visibility, more characters on tv are trans, {there are trans people in} films,  books and of course theatre! Plug plug… #Standbyyourtrans
On the topic of trans TV characters and visibility, you've been acting in the second series of the BBC 2 comedy ‘Boy Meets Girl’. It’s yet to have a premier date, but what can you tell us about your role in the new series?
I went for the lead role in the show a couple of years ago - in fact, I went for lots of trans roles and never got any! I went for the trans headmistress in hollyoaks as well..didn't get it! I’m actually going to talk about my experiences of the trans explosion in tv and film in my next show. I hope it’s not just a fad and the new thing being right on. Trans characters are often tragic and end up alone or dead. So in boy meets girl, Judy gets her man - so that's an improvement. Judy is very patient with her boyfriends cis family and puts up with a lot so in the 2nd series that I am in it's good to see she has some trans characters for support...at a support group. I play Vera. She’s very feisty and outspoken - I can't think why I was cast? It's been great to be part of this ground breaking show and the scenes I am in had at least 10 trans actors so that may be a first, for the BBC at least.

I can't wait to see you in the tv show! What's next for you with your new show...let me guess, theatrical and queer?It will be queer for sure the next show will be a theatre piece but the style may change! Just developing it at the moment. It's called "you've changed" and looks at the process of change my change and the wider world’s changing attitude to trans visibility. It will be fun and have some dancing I think… excited to developing my work. Currently in a new trans musical piece it's not my work but great to be a performer in this new work about gender and voice.
interview kate o' donnell saidbyyou sexuality theater trans vita