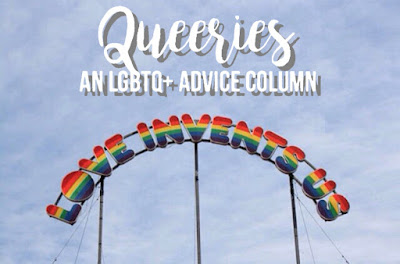 Queeries is an LGBTQ+ advice column catering to any individual across the gender and sexuality spectrum. Throughout this series, we will be answering questions or “inqueeries” that readers may have, and hopefully provide some closure and/or useful advice that can be used in everyday life. All questions are anonymous and will be answered to the very best of our abilities. Inqueeries can be sent to our Instagram’s DM @risenmags, email address: risenzine@gmail.com, or Tumblr page: risenmags.tumblr.com
Happy reading!


One. Do you find it difficult being the minority of a minority?

Joy: In my experience, being the minority of a minority can be pretty exasperating. It feels almost like a balancing act. I want to embrace my culture and roots, however the only connection I have to these roots (my family and some friends) can still be uneducated and homophobic. So, I try to find solstice in the LGBTQ+ community, but still I face microagressions and lack of representation. Queer POC do not have many means of positive portrayal, especially in the media. Many of the characters that depict our community don't receive huge roles in major films or tv shows. If they do, they most likely don't survive to the end, or they live generally unhappy and dissatisfying lives. There seems to be no grey area.

Derek: As a gay Asian with a physical disability, I'm sometimes fearful of the people around me finding out that I'm homosexual. With little to no support from my family and the hatred towards LGBTQ+ in any society, I have always second guessed my decisions to express myself. Always surrounded by homophobic people, I manage to put up a bravado to hide my insecurities. On top of all those problems, being an Asian man in the gay community is as difficult as being gay in an Asian community. Asian men are always seen as feminine and submissive due to the racist stereotypes that revolves around the idea that Asians are weak compared to other races. I guess you can say being a minority of a minority is pretty difficult. What I don't understand is how other minority groups invalidate and oppress other minority groups when they, themselves, are being oppressed by the system too.

Vic: Being both bisexual and Filipina has always been difficult for me to deal with. I saw no representation of myself on television growing up. I was scared to talk about racism with my white LGBTQ+ friends, and I found that I couldn't even find the courage to bring up being bisexual with most of my brown friends. Some days it feels like people will always be hating you for things outside of your control. But nonetheless, I try to remain proud of the things that make up who I am. I try to educate members of all the separate communities I belong in. So, yes, it is difficult and often tiring being a minority of a minority. But this is who I am and over time I've learned to love the parts of myself the other people deem controversial.

Two. Can I call myself bisexual if I’ve never been with a girl / how do you know you’re gay?

Liv: Ever since I hit puberty I only ever experienced sexual attraction towards men, albeit, it never extended beyond their physical appeal. It was only when I realized I connected with women on a more deeper and emotional level (and as a result, began developing feelings for them) that I realized I might not be exactly straight. I believe it is in anyone’s right to label themselves as whomever they identify with; regardless of past relationships (or lack thereof), or previous sexualities they once identified with. You do not need to, in any way, seek validation for your sexuality. Someone telling you that you cannot identify as bisexual because you have never been with the same gender is like someone telling you that you can’t like dogs because you have never owned one. Irrational, right? The way you perceive yourself is ever evolving and, I believe, is something you should embrace.

Pria: Yep! Just as S says, you don’t have to be with someone of the opposite gender to know you’re straight, so why should being gay be any exception? If you’re afraid of being cast out of lgbtq circles or being doubted by your parents however- that’s completely understandable. Many people, especially adults who may not be as open minded about sxuality, might try to make you doubt yourself (“aren’t you too young to know?”) but the bottom line is that YOU define YOURSELF- be it gay, bisexual, queer or no label! Whoever you are and whoever you love is completely valid, and you don’t need to figure it out right now- or ever! Something that also helped me come to term and define my sexuality was consuming lgbtq media and speaking with other queer youth (such as you’re doing now, by reaching out to us!). Best of luck!


S: To keep it simple, yes, you absolutely can call yourself bisexual if you’ve never been with a girl. Plenty of straight girls have never been with guys and call themselves straight, and doing this is 100% okay because you know who you are attracted to! If you identify with the bisexual label, then feel free to call yourself bisexual. I’ve always experienced sexual attraction to men, but only recently did I realize that the attraction I had towards girls was also in the same vein. Make sure you keep in mind that everybody’s “moment of realization” is different. Some people have always known they’re not straight, and some people figure it out a little later, but whenever and however you discover your sexuality is totally valid.

Three. What if being gay is just a phase for me and when I change my mind, people will be mad?

Alexis: I'm going to start this off with the most important thing I'm going to say: you are in full control of yourself, not others. You are not forcing people to like you. The people who choose to be your friends will continue to make their own choices no matter what you do. You cannot control what other people think, so the only person you should care about yourself is you. Identify what makes you happy, not others. People will stop being friends with you no matter what you do. It's up to you to decide how it affects you. That being said, if your friends are good friends, they won't be upset, they'll be supportive and understand that sexuality is fluid and you are no exception.

Mae: The most important thing is to not stress about it. That's something I tend to do a lot, and something I’ve really had to work on. I think a big misconception is that you need to pick a label and stick with it for the rest of your life when really, that isn't true at all. If you pick one label, and later change your mind, it doesn’t mean that you were lying or that you were wrong. Sexuality is fluid, and sometimes the label changes, and that's totally fine! Remember that whatever you’re feeling, you are allowed to feel it, even if you don't have a name for it. It’s all about what makes you feel comfortable. And you don't have to prove how you self identify to anyone. Just try not to psyche yourself out, and have fun with it!

Four. Are there more than three sexualities?

Jinny: There are definitely more than three sexualities, and you don't necessarily have to be defined by them! It's perfectly fine if you don't always fall directly into one specific sexuality, but researching and asking questions can always help you discover what your sexuality may be, and even entering forums (the generally asked questions section is typically very helpful!) It's also okay if you choose to roam the world without any notion to label yourself with anything as well!