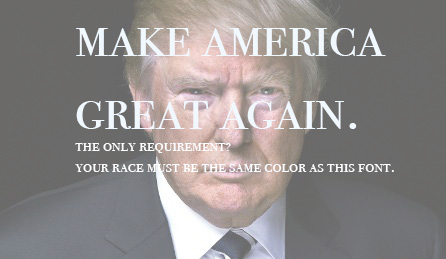 Make America ______. I left this section empty because at this point in the race, “great” seems like heavy sarcasm. The chaotic headlines following Donald Trump’s spiteful antics and Hilary Clinton’s Twitter retorts leave a multitude of synonyms available for the space. Shockingly, none of them are positive. The 2016 presidential race has become a comedian’s wet dream, full of buffoonery and confusion that even Sarah Palin couldn’t inspire. What isn’t humorous, however, is the state this country may be in if it falls into Trump’s baby-sized hands.
We’re currently a country divided, more so than we’ve ever been in the last decade. The recent shootings in Baton Rouge and Dallas leave citizens and the law enforcement meant to protect them, on the edge. This nation needs unity (or understanding, at the minimum). What we’re being met with instead is intolerable fear and hatred, preached by the unofficial savior of the GOP. Trump has placed himself on his own pedestal, rising above the Republican party by feeding off of Conservative fear.
In his Republican presidential nomination speech, Trump boasts about his ability to give people a “voice”. Most of these so-called “forgotten men and women,” as Trump remarks in his speech, are not underprivileged. They are not minorities. They are not suffering to learn English to make a living. They only see themselves as being unheard because listening to someone else’s voice sometimes means quieting your own, and that is a situation that they are not comfortable with.
Trump’s campaign strategy relies on creating scapegoats out of Muslims, Mexicans, and Blacks, to name just a few. Angry white Americans with a resentment towards anything different have found a home in Trump’s views. Their anger and violence - to them - is finally justifiable. If Donald Trump becomes the leader of this country, the amount of violence that could ensue is terrifying.
I end this piece with a plea. If you’re of age, vote. It is no longer an option, but a saving grace.