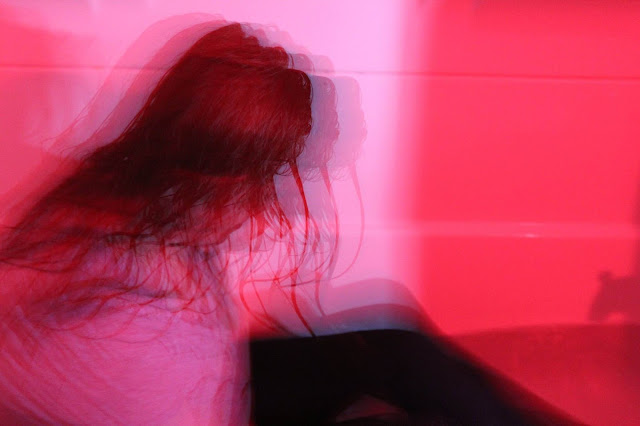 I don’t need five cups of coffee to wake me up when I’ve got monsters on top of that already,
following me around like shadows or flies on the wall.
And sooner or later, they’ll be stuck inside me instead of chasing after me. They’ll be growing like a cancer—stage four—without me seeing it coming.
I can’t get away from it, and all I can do is look at my hands.
They are normal hands. But they’ve done so many horrible things to my body. All I’ve wanted was for them to get out.
I’m diving head first into my shower wall because their voices ring like incessant phone calls and I refuse to pick up and I’m afraid, I’m always afraid, so I wait for the phone to stop ringing and dial a number instead.

I hear the dial tone for the rest of my life.
I don’t remember if 911 ever responded, but I woke up with blood on the tiles and on my head.
I am in one piece. It hurts like a bitch, but I’m in one piece.
It’s time to stand up, and I feel almost like a foal walking for the first time.
I feel like this every day.

I’m on my hands and knees at least
and I’m stumbling out of the shower.
I think I made too much noise.
As I left the phone again,
I hear that someone is moving up the stairs.
And they reveal me with the bathroom door.
There are lights, but I think those are just her eyes.
Her voice kind of sounds the way you’d imagine stars sound if they fell on a windowpane atmosphere when she talks to me.
I think my breathing is better.
I think her presence stopped the bleeding.
The receiver is still held up at my ear,
while her hand is held out towards me.