Women in Film: The Bechdel Test

on May 11, 2016
If you care about gender representation in films, you've probably heard of the Bechdel Test. If this is brand new to you, come and be enlightened.

The Bechdel Test comes from a comic strip called "Dykes to watch out for" by Alison Bechdel. In 1985, Bechdel wrote "The Rule." It wasn't meant to be a rubric for female presence in film, it was simply a joke by a lesbian woman who felt marginalized by popular culture. It rose in popularity recently as a way to assess the visibility of women in movies. 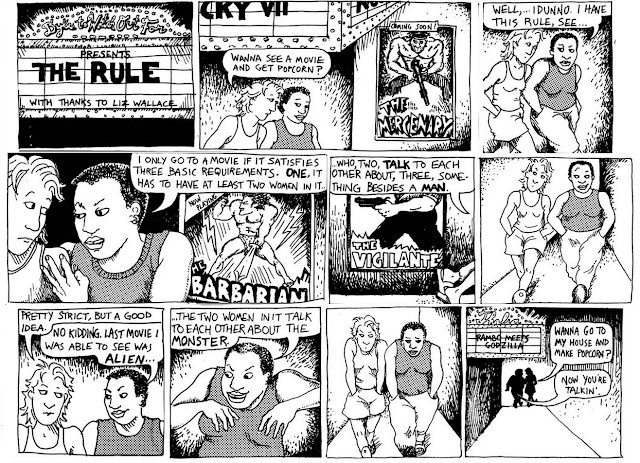 To summarize, in order for a movie to pass The Bechdel Test, it has to have at least two female characters that speak to each other about something other than a man. There is no set minimum time for how long the conversation between the women has to be, so many might say that The Bechdel Test is the lowest bar you can set for female visibility in movies.

Creative freedom to write stories is necessary and a lot of stories revolve around male characters. There isn't a high demand for female characters. The movies that are male driven outnumber female driven ones, something unjust and desperately needs to change. There needs to be more women involved in the film industry, to balance out the scale of gender inequality. There needs to be more inclusion of women of color, transgender women, and gay women, because as many people know but love to forget, representation matters.

Keep in mind, if a film fails the test, it doesn't mean it's a bad (or sexist) film. There are really good films that feature amazing female characters but don't speak to another woman through out the film, like Pacific Rim, Gravity or Fight Club.

If you knew about The Bechdel Test before reading this, do you have any new thoughts? If this is your first time hearing about it, will this new concept change your views on how you look at female presence in films?