May 2016: Risesponding to Harriet Tubman on the Twenty Dollar Bill 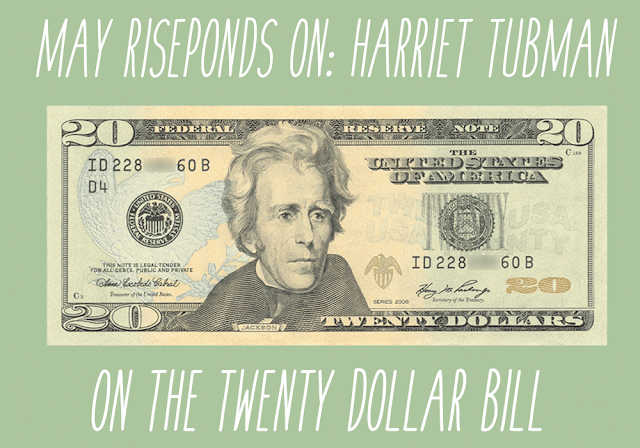 
The topic for this month is the US Treasury's plan to redesign the $20 bill, putting Harriet Tubman on the front and Andrew Jackson on the back.


Adele Lukusa: The idea of a face on a dollar bill changing makes me happy, especially when it’s one of an important historical back figure, but delivers quite a lot of controversy with the way it is being proceeded and handled by the media and government. The world and society has changed and progressed so much from the 17th century, that it’s time (or even passed the time) to make a difference and change the faces on the dollar bill. In a day and age where racism is still prevalent, a black historical figure chosen to be the face of the 20 dollar bill is not only exciting, it’s progression. The black people of the United States are so used to having little to no representation, and this could be a huge gesture of the inclusion of black people in America, especially when that historical figure is slave abolitionist, Harriet Tubman. The problem is the way they’ve went about it.

Instead of letting Tubman have her face on both sides, she only gets one and Andrew Jackson remains on the other. Why only one? Why can’t they let an important black figure stand proudly on their own? Especially with Andrew Jackson, who owned slaves himself, and makes having Harriet Tubman and all she stood for on the bill with him ironic and insulting. He may be an important historical figure in the United States but that simply does not excuse his treatment of the Indigenous and his attitudes towards the abolishment of slavery.

It’s the 21st century, things like these shouldn’t be swept under the rug as it has for so long. This could have been an act of love and appreciation of America towards it’s African-American citizens, but has instead transformed to become a slap on the face. Why don’t we, black people, deserve a bill to ourselves? Why does Harriet Tubman along with the black community, have to settle for less, when none of the other historical figures have?

Alexis: The fact that Harriet Tubman may finally be getting a place on the twenty dollar bill is so so exciting to me, especially because she was (sadly) one of the only women I've learned about in Social Studies classes. I'm glad that the first woman on an official bill (not a coin nobody uses, a commonly used bill) is such an amazing role model and a WOC. This is leaps and bounds for America, and finally a step in the right direction. However, the fact that they're just moving Andrew Jackson to the back, for lack of a better term, really pisses me off. Andrew Jackson was a slave owner and all-around amoral dude. And he even tried to dismantle the banks, yet he still got a spot on the $20! Putting him on the bill with a slave is all kinds of disrespectful and racist. Putting Harriet Tubman on the bill is such an amazing thing to do, but when you're keeping a bank-dismantling slave owner on the back, you have to wonder if this is being done to showcase equality and finally take a step in the right direction, or if it's just to gain respect and pretend racism no longer exists.

Joy: I love the idea that Harriet Tubman might be the face of the new 20 dollar bill. A nation’s currency usually represents their country or shows a bit of their history. America’s history is diverse, full of people fighting for change and a higher standard of living. Our history was so much more than the founding fathers, and I’m glad we are slowly shining a spotlight onto others that tried wholeheartedly to turn America into a better place. Representation is important. There are historical figures that have done so much for our country that are disabled, POC, or women that aren't on our bills. It's the 21st century and we deserve to see the true embodiment of America, something different than our textbooks try to filter before presenting it to us under a Eurocentric light. I hope Harriet is the one who starts it all, and that this change is a small step towards seeing more representation not just in our money, but in our media as well.

However, I don't agree with the decision to keep Andrew Jackson on the back of the 20 dollar bill. None of the other historical figures have to share, so neither should Harriet. Andrew Jackson might be a historical figure, but I think it would be okay if he was eradicated to make way for the first black woman on a bill. Was it necessary to compromise by contradictorily having a slave owner on the back and a woman who helped end slavery on the front? We should not have to settle.

Terra: It’s about time a woman and a person of color gets their place on a bill. Our country runs on money, and the Presidential faces of the bills long past serve as a reminder of American values and heroes. We’re finally acknowledging the hard work and the sacrifice made by both women and people of color with the new additions to the bills. Unfortunately, it says a lot about the state of our country when we refuse to give the full credit that’s due to figures like Harriet Tubman. While finally placing her on the bill, we’re forced to compromise and still share the bill with Andrew Jackson. Andrew Jackson is an important figure in American history just as Harriet, but his slaveholding past is a slap in the face towards sharing the bill with Tubman. While we’ve made irrefutable steps forward in recognizing and representing people of color, and women alike, we have a long way to go.

Janice: While this is a topic the black community should have the greater and final say more than anyone else, here is my opinion. (I also find it intriguing that Jacob Lew, a white person, was the one who decided to put Harriet Tubman as the face of the 20 dollar bill.) Harriet Tubman is known for being anti-capitalist and an abolitionist. However, Andrew Jackson was a known slave-holder. It is unbelievable that Harriet Tubman has to share the 20 dollar bill with Andrew Jackson. It is not a message of how much this country has changed and developed and became less racist, it is a message that PoC, especially those who are women, will always have to comprise. Even if Harriet Tubman did not have to share the bill, it clashes with the fact that she was against capitalism. It seems that the government doesn't really care about Harriet Tubman and what she stood for, to me it seems that they just want to lessen the racial tension that has been increasing recently and shut people up, thinking this will appease them. The less privileged are always compromising and it's time to stop.
$20 bill adele lukasa alexis andrew jackson harriet tubman janice joy may racism riseponds terra