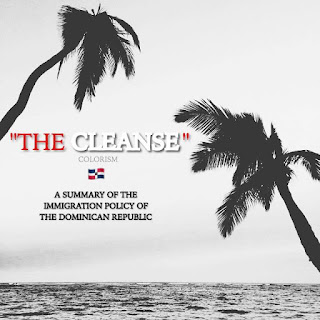 "The Cleanse"
A Summary of The Immigration Policy of The Dominican Republic
By: Jarline Almonte

A place I believed to be as peaceful, bold, and strong, The Dominican Republic was always perceived as "highly" to my little naive eyes. As I got older, it's realities struck me. My native land, acting on their racist perceptions, that of which I've been hidden from for years. In the beginning of October 1937, the ruler of the Dominican Republic (El Jefe) was partaking in inhumane actions, "Trujillo authorized an ethnic-cleansing campaign along the Dominican-Haitian border with the aim of expunging dark-skinned Haitians", (according to ForeignPolicy.com) also known as the Parsley Massacre. The name was derived from a popular story that could be unauthentic, that is described as a test to distinguish Dominicans and Haitians. They would be asked by soldiers to pronounce the Spanish word for parsley, perejil. This was the basis of the test because Haitians were known to have difficulty pronouncing the word.

This was also deemed as a full-proof test because many Dominicans believed their Spanish accents to be distinguishable. The following sequence of events included a massacre, leaving about 25,000 dead, which continued on for a period of two weeks. These actions which have stemmed from racism has not ended yet, sadly.

Fast forwarding to the modern day Caribbean, on the Island Hispaniola, containing both countries Haiti and The Dominican Republic, the racism continues to seep through its soil. Over 10,000 Haitian migrants and Dominican residents of Haitian descendants were either forced or apparently "volunteered" to be deported.

The Dominican Republic has been denying papers to Haitian immigrants, Dominican-born citizens of Haitian descent, or anyone that fits the image of a Haitian — down to the smallest attributes such as ethnic hair and dark skin. This seems rather odd, as all of Hispaniola has descendants of Africa, since the island was filled with African Slaves after it's colonization. This is a prime example of colorism and internalized racism, where The Dominican Republic Government sees itself as superior, whitewashing it's citizens and "cleansing" the country to fit their belief that the physical attributes of a Haitian fit "the image of poverty".

Sadly, these actions are supported by many Dominican Citizens and government officials. According to theguardian.com, "Former president of the Dominican Republic Leonel Fernández recently penned an op-ed that dismissed concerns voiced in American and European media outlets as “an effort to degrade and smear us before the international community, something that we as a generous and caring people do not deserve.”

This whole situation saddens me, seeing my home take part in such a horribly blatant racist policy. I feel as though I have to do something about it, as I'm made to feel guilty of this by some Dominicans. That I'm lucky to be in America, and fair skinned; that I'm lucky to have the opportunity to achieve more than any of them could hope for. The idea of this has made me aware of my privilege, yet I will never truly understand the pain of those affected by the "Naturalization" Program. Obviously, the Dominican Government is taking note of what the United States is doing, so we must fix the issue of the immigration policy primarily here in the United States of America, as well as continue through the path of diminishing and minimizing the Eurocentric Beauty standards that so heavily affect societies all over the world. And then hopefully, the dominoes of ignorance will stop falling, and I hope the perspective of both my current and previous home will change.
colorism currentevents immigration Jarline racism