INDIGENOUS NEGLIGENCE, PART ONE:
YOUR HANDBOOK TO INDIGENOUS ISSUES IN CANADA 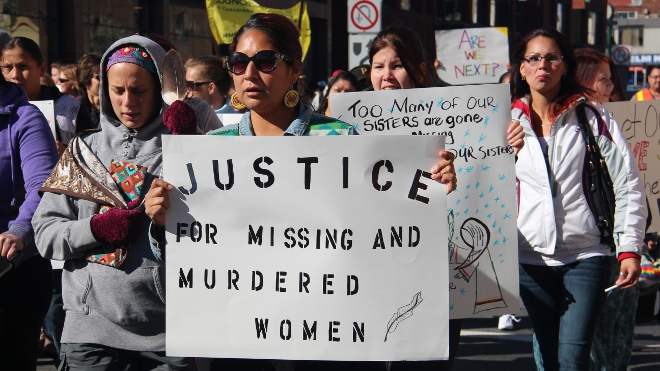 The world views Canada as a safe place, as a neighbor of the United States filled with Tim Hortons, maple syrup and sentences that end in “eh”. Without a doubt, this northern country is wonderful for many reasons, but not so much for its treatment towards the Indigenous* community. The world has never treated the Indigenous fairly and Canada is no exception to this. The history of Indigenous people in Canada is filled with racism, assimilation, and ignorance Although some aspects of Canada’s treatment have gotten much better for this community, the problems they face continue to grow bigger and neglection is no solution to this.

To understand the issues that face the Indigenous today, a look into their past in Canada is needed. In 1857, the government put into place a federal law called the Indian Act. This act causes the government to have control over many aspects of the Indigenous community, including Indian* status, resources, will, land, education, bands, etc. This act was put into place by the Canadian government to not only control the community, but to assimilate them into Canadian society by suppressing their “cultural, social, economic, and political distinctiveness”. The actions of the Canadian government resulted in the removal of Indigenous children from their families and forced entry to residential schools (where English or French communication was mandatory, excluding Indigenous languages), the risk of losing legal Indian status (reasons varying from graduating university to marriage outside of the Indigenous community, etc), banning potlatch* and other important ceremonies and more.

After the Second World War, Canadians realized the troubles of the Aboriginal* people, who contributed greatly to the war among the First Nations* soldiers, but were largely disadvantaged in their home country. The government then abolished the most offensive/oppressive laws of the act and gave them the liberty of practicing their important ceremonies and more to amend for the past.
A decade later, the Indigenous were granted the privilege of voting, without the risk of losing their legal identity (due to, once again, the Indian Act). Later, in 1969 Prime Minister Pierre Elliot Trudeau would even propose a “white paper” policy to wipe the slate clean for the Indigenous and create equality between their community and Canadian citizens. They refused, as that would not only dismantle the Department of Indian affairs put into place but would erase their legal Indian identity. Today, the Indian Act still remains to preserve the Indigenous’ legal identity and carries much controversy. It is seen as a paradox to the eyes of many, but this subject is a delicate one, with its past in assimilation and oppression, and to solve it both the Canadian government and the Indigenous people must come to an agreement together. 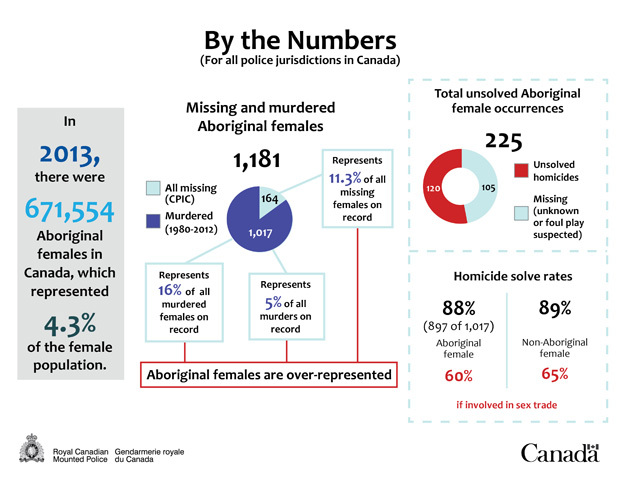 Although 4% of the Canadian population is Indigenous, the amount of missing and murdered women from their community is astounding. Of the women of Canada, Indigenous women make up 4.3%, but make up of 16% of female murders in the country (see graph). To make matters more shocking, in Manitoba about 55% of women who are murdered are Indigenous. Not only are the percentages of the death of Indigenous women is so high (and hasn’t changed since the 80’s), but these homicides are more than likely committed by an acquaintance of the woman, more likely than not, or even a spouse. Also, unsolved cases are a regular to Indigenous women, as of November 2014, over 225 missing or homicide cases have remained unsolved, many of them ranging from the 1980’s to present day. The RCMP have also discovered that many of the women who were murdered have a “criminal record, are unemployed, and/or consumed intoxicants”. These women are killed so often, with little to no coverage, and rarely get the justice they deserve.

On April 13th 2016, in Toronto, Ontario, Black Lives Matter and Idle No More protesters occupied the Indigenous and Northern Affairs Canada’s (INAC) office to bring awareness to the high suicide rates in the Indigenous community, mainly due to the 11 attempted suicides in Attawapiskat on the same weekend. Suicide is at a high in Attawapiskat, as of September, about 101 citizens have attempted taking their own lives. This high number is terrifying, as the ages of these people range from 71 years old all the way down to 11, yet no real attempt to solve this problem has been made. But Attawapiskat is not the only place hindered by the high suicide rate of its people, the whole country is. The rate of suicide in the Indigenous is about twice as much as the nation’s average. Suicide is not an epidemic overall for the Indigenous, as it varies by area, but it is still important to be aware of the reality of the Indigenous face to suicide, notably due to places like Attawapiskat, whose suicide rate isn’t going down any time soon.


The Indigenous community face a lot of problems such as high suicide rate, a large amount of missing and homicide cases for Indigenous women and the aftereffects of the controversial Indian Act, and these are just three of many. In the next part of this series, issues the Indigenous face such as the state of their reserves, the high prices in northern Canada, and more.