March 2016: Risesponding to the Concept of War 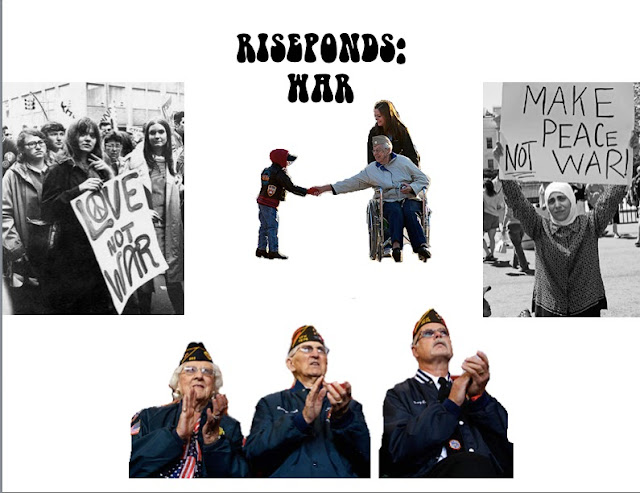 Ina Ruiz: I believe that war is not necessary, it will only lead to more problems and conflicts. War shouldn’t be started because of disagreements that can be settled by compromises. We need people helping each other not killing each other.  The people who are fighting the war aren’t the only ones who’s going to be affected, but also the citizens of the country. Why risk the lives of the people, when you can try and negotiate peace with? The people will also be forced to evacuate and find a place for protection. People’s lives should be valued, we need to think about the lives that we are risking when we go to war. The person who starts the war is the one who should be fought, not the thousands of innocent people who get in the way of soldiers. People usually just focus on winning the war and they usually don’t think about what happens in between. It’s the government’s responsibility to protect the people, not endanger them. What the world needs is peace and healing, not another series of wars and depressions. In the end there isn’t a real winner since both sides would lose lives and properties so a war would be pointless.


Jinny Lee: War is one of the most conflicting topics we face today. Living in my safe little suburban town, we learn about wars from all over the world, centuries ago. Whenever it is brought up in world civilizations, I forget that there are many big wars going on right now. I ask myself, what would it be like to live where there are wars going on, to be affected by a war effort, and live life with no idea who could kill you the next day; the idea is so distant to me that I think of the early 1900's, but I forget that across the globe there are people that live like this today. I live with American privilege, to think that if Donald Trump becomes my president, I can move back to Korea; but it’s not that easy, and it’s a shame that I don’t acknowledge this all the time.

There are people here that reject the idea, but war and the army also provide many jobs, and a way to pay back to your family roots and tradition. But (America) we don’t even protect our veterans, the people who fight for other countries, nor do we honor them. Many Veterans come back with PTSD, can no longer keep a regular job, and eventually go homeless. Memorial Day is spent with fireworks and Macy sales, but we forget it’s the day that we honor the people that risked their lives and died. I am in no way patriotic, but it’s a shameful cycle when Veterans Day is labelled a solemn holiday, rather than celebrated for their survival. If we can’t help the people we “help” fight the war for, the citizens of the country, or even our veterans at home, it shouldn’t be a practice we continue. The immediate change of getting rid of war and armies will lead to an economical downfall, and a great increase in unemployment; however, society is learning to adapt, and I believe that war can eventually become a practice of the past.


Alexis Daigle: When I was younger, my dad would always tell me that war was necessary, and that it created jobs and helped the economy. Even though I was incredibly impressionable when I was little, that never sat well with me. I could never understand the death and destruction itself, much less why anybody would think it was a good thing. As I grew older, and little by little, more educated about war, I realized that seven year old me was right. War only brings money to the rich and powerful; it is the poor and even middle class, the average citizens, that truly suffer.I still believe that war is sometimes inevitable, but it is nearly always fought for the wrong reasons. For example, the US waited to label Iraq as an enemy until they found out that Iraq was supporting terrorists, they didn't care about the Iraqi government killing innocent Kurdish people. The US government only cared about the oil they would get if Iraq won the Iran-Iraq war.I know that not everything can be solved peacefully, like terrorist attacks, but when war is viewed as a means of profit, it loses its meaning. A corrupt government cannot start a straightforward war.


Kai Song: As a resident of the U.S., I face certain privileges concerning war. I live in a safe neighborhood and my area isn't violently transphobic or racist. I go to a private school and don't have to worry whether I'll be having a meal when I come home, and I always have pages from the textbook to read and topics to research. There are many things that are unjust about the U.S., but merely living here allows me a certain privilege that many people don't have.

War inhibits millions of people from gaining access to education, food and water, and shelter. Corrupt governments have let their people starve and continue to flood money into ammunition. Injustice is everywhere, and from any way you look at it- war is objectively wrong.

In the face of inhumane treatment and injustice, hearing about such violent violations of human rights in a country that has bred and force-fed this rhetoric of "inalienable human rights", it feels shocking and unexpected. This sharp gutted feeling of disgust and shock is natural, and it is important to recognize it in order to empathize with the struggles and war facing those people. The problem is when the conversation stops at the initial reaction.

We too often get caught up in this idea of faux-allyship, as we crow about the tragedies of other countries for a good five minutes before forgetting about it. And this is ultimately because of: privilege. It's uncomfortable to talk about the privilege we have, and it's even more uncomfortable to face such cruelty when we have never experienced the traumatic and unfair circumstances of war.

Privilege begins and ends this conversation. Privilege allows me to have this conversation about war without living in one, and privilege will allow me to forget and revert to the tired, stressed-out student who only cares about finishing an assignment. In the conversation of privilege, we need to recognize there is always someone who is paying the cost of our privilege.

This is the reason why countries like the United States aren't involved in wars like this. There's a reason why we only hear about tragedies in places like France and Brussels. It is because those countries have carved the very word of privilege through genocide, colonialism, and stealing wealth and resources from other countries. We have already paid our due, if not overpaid, in war from centuries past. We too often forget how the seat of privilege was created, and we too often forget that our wars were the ones we ourselves started and won.

The conversation on war doesn't start from the most recent bombing attack. It starts from centuries of imperialism that ultimately set these countries up for war. Our place of privilege reeks with the blood of innocents, and recognizing why that is and learning about the root cause of the uprising of war is only the start.