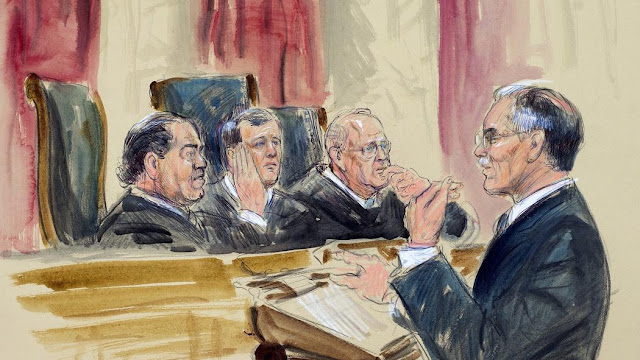 
When Supreme Court Justice Antonin Scalia passed away on February 13th, the geography of the nation's highest court changed drastically. From a panel of nine judges (five conservatives and four liberals) the population of some of the country's most influential public servants dropped to eight (four conservatives and four liberals) creating an ideological deadlock and potentially changing the way LGBT+ legislation and related cases are interpreted in the months to come.

Antonin Scalia was many things but most importantly, he was an originalist. The concept of originalism dictates that the US Constitution has a fixed meaning pertaining solely to the words written in the document, and is closed for future re-interpretation regardless of the changing needs of the people. Because of the absence of language specifically relevant to the LGBT+ community, Scalia's originalist approach immediately closed off any idea of approval for pro-LGBT+ rulings in the Court's decision making procedure.

Fortunately, in past cases such as the most recent and impactful Obergefell v. Hodges case (fundamental right to marry is granted to same-sex couples), typically conservative Justice Anthony Kennedy voted in favor of granting the right, creating a narrow 5-4 majority. While this victory should be celebrated, there is no way to predict how far Justice Kennedy, a considerably conservative individual, would go in favor of the national LGBT+ community. There are still many obstacles facing this group and many cases, to be sure, that will determine one way or another, the fate of this community's lifestyle in America.

With eight justices on the Supreme Court and equal ideological representation, there's no telling how future rulings will shape up. The vast majority of political analysts have forecasted a complete stalemate in the Court and so far, they haven't been wrong. This would mean that cases brought before the justices with relevance to each respective party's conflicting ideals could result in a 4-4 vote, moving jurisdiction over a final ruling to the applicable state court and taking away the chance of a nationwide ruling on a certain issue. This would result in a vast amount of conflicting state/region wide rulings on important, impactful cases.

Fortunately, there is a way to avoid dealing with this situation for an extensive period of time. The government must fill the slot on the Supreme Court to bring it back into the proper balance. President Obama has already nominated a highly qualified, LGBT+ groups backed nominee: Merrick Garland. Garland, a centrist in the realm of political ideology and a well-known figure in Washington political circles, has served as a prosecutor on the Court of Appeals for the District of Columbia Circuit Court since 1997 and has maintained the role of chief judge since 2013. The list below explores the support recently released by several prominent LGBT+ individuals and groups in various statements and press releases for Merrick Garland's nomination.

Senator Mark Takano, the first out person of color to serve in the U.S. Congress issued a press release detailing his support for Garland and applauding the President's choice. In the press release, Takano noted how "eminently qualified" Garland is and he even highlighted his "distinguished career".

Kate Kendell, The National Center for Lesbian Rights’ executive director,  chose to focus on the importance of the Senate's immediate and upright consideration of Garland, as well as saying how filling the vacancy should be an "urgent priority" and "any delay would be unconscionable".

The Human Rights Campaign, "America's largest civil rights organization working to achieve lesbian, gay, bisexual and transgender equality", also released a statement. This bulletin emphasized the power of the Supreme Court in impactful cases such as Obergefell v. Hodges (gay marriage decision) and Romer v. Evans (LGBT+ individuals cannot be legally exempt from legal protection when prosecuting on the grounds of discrimination) while also noting Garland's qualifications and the Constitutional responsibility of the Senate to give Garland fair consideration.

The National LGBTQ Task Force, a national corps of individuals working to create complete equality for LGBT+ individuals, immediately jumped in with their support, detailing in the first sentence of their statement, their strong encouragement of US Senators to justly consider the nominee.

Lambda Legal, the oldest and largest national legal organization working to achieve recognition for the full civil rights of LGBT+ and HIV positive individuals, called on the members of the Senate Judiciary Committee to fulfill their Constitutional duty to ensure that Garland is given a "complete and timely review". The organization also highlighted the emergence of ardently anti-LGBT+ laws "masquerading as religious freedom protections" and the likeliness of these issues and other relevant topics coming before the Court in the months to come.

Lambda Legal has also created and launched a petition titled "Tell U.S. Senators: Do Your Job", demanding that U.S. Senators give Garland a fair hearing and a swift vote. As of the publication of this article, the petition has reached almost 17,000 signatures with a 20,000 signature goal overall.