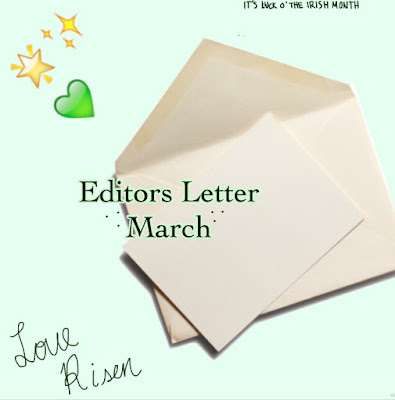 You haven’t heard from us editors in a month and I think it’s safe to say we missed you guys (we hope the feeling is mutual). We’ve had a hectic schedule during the month of February, so we apologize for neglecting to keep up with our monthly Editor’s letters but rest assured we’re back on track! A lot of things have happened during the course of one month and we’d like to catch you all up to speed.

We’ve had the unfortunate departure of one of our co-founders and co-Editors-in-Chief, Priscila Hernandez, due to personal reasons. We still converse with her regularly and are the best of friends (who occasionally roast each other), don’t you worry! We were all heartbroken to see her go, especially me (Jazmine), since we’ve built Risen from the ground up but we plan to keep the same tightly knit relationship with her and Pris plans to, and her exact words were, “to cheer us on from the sidelines”. Priscila means the world to us and we’re happy to see her making decisions for her best interest! Pris if you’re reading this, we love you!

“I have the pleasure of introducing all of you to our new co-Editor-in-Chief that I will be working alongside from now on, Claire Halloran! She’s one of our best members and writers who is always up to challenge the “normal and safe” way to think of an issue and tackle it with a unique perspective. She’s one of the most hardworking and prioritized people I know! I, as well as the rest of Risen, hope you all give her a warm welcome and lots and lots of love!”
-Jazmine

“I am so excited to be the new co-Editor-in-Chief, Risen truly means so much to me. I am so lucky to be able to lead such an amazing team of writers and artists, and I am so proud of us all for how far we’ve come. Risen is a family, and I am so grateful to be a part of it.”
-Claire

Although we’ve lost some golden members, we’re happy to say we’ve gained new members, or as we like to call them little ducklings, within the family! As some of you may know, we’ve held applications for visual artists of color and it’s safe to say the talent in Risen has skyrocketed since the ducklings have joined. We’re excited for all of you to see the fresh and new ideas they’re all going to bring to the table this month of March. Thank you for everyone who applied, we appreciate all of the love and support we have received!

In the upcoming month, we will be publishing the first pieces of several new series! One of them is the Friday Film Club. A group of Risen members have gathered to watch and comment on a select handful of films, and we are ecstatic to share our thoughts! March also brings the beginning of the Myth-busters series, where we will be discussing various myths regarding all different topics, such as sexuality and religion. While we’re starting new series, don’t think we’re abandoning our first series ever, Riseponds which will continue each month!

March will also be a celebration of one of our favorite holidays, International Women’s Day! Risen will feature artwork and articles revolving around women to help celebrate that, as well as International Poetry Day later in the month.

We have a certain surprise for all of you this month that we’re antsy to reveal, so keep a look out for it!

We can’t thank you guys enough for the abundant amount of support you've given us over the past few months! We'd never thought we'd get this far but we have and it's because of all of you who read our content both on here and Instagram! You guys are such amazing people and we over at the Risen household would like to give you guys all of the love we have for you (which could fit 10 Empire State Buildings). We hope you guys stick around as we continue on this journey and may you be blessed with a rich leprechaun at the end of the rainbow this month of March!