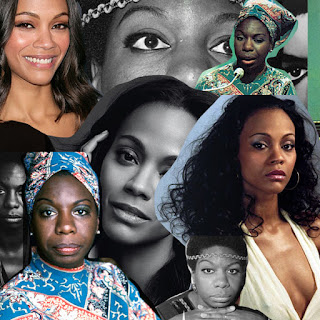 Art by Lucy
When I was told that Nina Simone was to have her own biopic, I was initially interested and excited over who they would cast for the influential songstress. However, when I heard that Zoe Saldana would play the part of Nina, confusion took over as the primary feeling. Upon seeing pictures of Saldana wearing darker makeup and a prosthetic nose for the part, I became further confused.
Many black activists and actors have voiced their outrage at this problematic casting, yet Simone's daughter has gone out of her way to defend Saldana. Saldana is a Black-Hispanic American who finds herself more connected to her Hispanic roots. Simone's daughter, Lisa Simone Kelly, has stated, in an interview with Time Magazine that, "It's unfortunate that Zoe Saldana is being attacked so viciously when she is someone who is part of a larger picture." This is true as she isn't the first to be cast for a nonfictional part that isn't completely similar in appearance. Saldana sports far lighter skin and smaller nose than Nina Simone; this directly contradicts the confidence in Simone's self-image which she so rebelliously flaunted absinthe pride that she took in her authenticity. By being cast for a role in which she needs to wear black-face despite being black communicates a larger picture just as Simone's daughter had described. She had described Saldana as not being at fault for she was only part of a system that runs deeper than the casting of actors for talent value. It is the use of lighter-skinned actors to portray those who are significantly darker that has been prominent in many films; take as an example the recent casting of Joseph Fiennes as Michael Jackson for an upcoming comedy. Though Simone Kelly defended Saldana, she also criticized the work of those behind the making of the film.

Saldana's casting, unfortunately, was not a choice that was based on the accuracy of the woman she would portray or of the group of people Simone represented. Lisa Simone Kelly had expressed that she wouldn't ever be able to understand Saldana's representation of the Black community as Saldana is a Black-Hispanic and not African American. Additionally, Simone Kelly has added in the previously mentioned interview, that, "There are many superb actresses who could more adequately represent my mother and could bring her to the screen with the proper script, the proper team and a sense of wanting to bring the truth of my mother's journey to the masses." Simone's relatives have also expressed their displeasure with the casting in harsh tweets and comments such as from Simone's brother describing the controversial casting as "...an insult to our people and their struggle..." Furthermore this statement is justified as Saldana isn't the representative black woman that they had hoped to have as Nina Simone. She embraces her Black-Hispanic heritage, yet has also made problematic comments such as her comment as to how people of color "do not exist." Additionally, she said herself that she didn't feel she was right for the part in a 2013 interview.

The casting of Zoe Saldana as Nina Simone is a robbery of opportunity for so many talented black actresses and is a step-back in progress of proper representation of minorities. Not only is she a less than mediocre candidate for the role of the impactful Nina Simone as a result of her appearance, she is also less than qualified to represent the black community with her swaying attitude towards issues that regard the community. Many don't realize the process that is done to determine a person for a role and Saldana is not to blame for the heavily opposed casting as she is merely an actress looking for work and once offered a position as great as the titular role of Nina Simone, accepted. By casting an actress that needs to use darker makeup and a prosthetic nose denies the authenticity that Simone stood for. We can only hope that the system in which she was cast can somehow be altered in an attempt to provide a larger array of people opportunities.
2016 actress actresses colorism currentevents dani daniela daniela ramirez film lucy miscellaneous movies music people of color