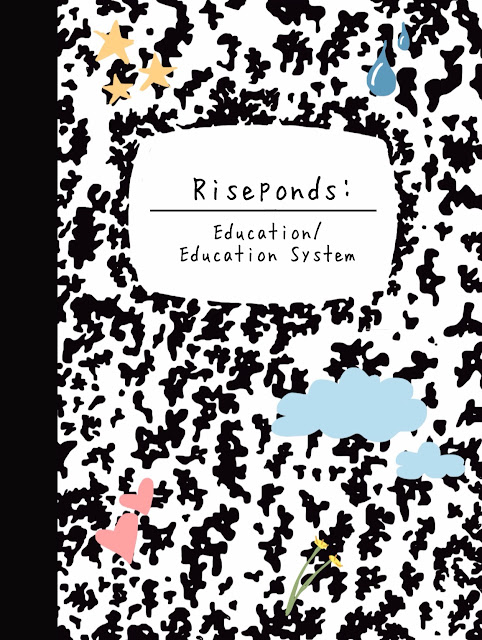 Riseponds is a series where a group of Risen contributors are selected not based on viewpoints, but solely by "first come first serve" to speak on a topic that they're passionate or apathetic about. The randomness serves as an advantage so readers can get different viewpoints from different people with different experiences or similar perspectives from different people. With the randomness comes the surprise of how contrasting or similar Risen members think when it comes to a certain topic.


Jarline A: The American education system is a mess.

First of all, I don't understand the point of making it so expensive! For a semester of college, I'd have to pay double of what my mother makes yearly. Everything you need to learn and study can be done for free at a library as well as interning. You'll basically be paying 40,000 USD (give or take a couple thousand) for a piece of paper stating that you've successfully learned everything.
A good example of this is from the film "Good Will Hunting". Matt Damon's character, Will, has an argument with a Harvard student. The Harvard student goes on and on about how intelligent he is, taking direct quotes from books to make himself sound intellectual, whereas Will, a janitor at the University, was able to debunk all that the Harvard student was saying. Will basically talks about how he has read all the books the student was referencing, and that he is paying for an education that could all be found in a public library. He also states how as the semesters go by, the student will forget about a lot of what he has learned.
Lastly, I dislike the lack of POC history taught US History classes. Although the NYC Public Education tries to make our classes as honest and accurate, its still not enough. POC are only referenced to Slavery, The civil Rights Movement (Focusing mainly on Martin Luther King, Jr. and ignores the fact that movement is still alive today), as well as The Lewis and Clarke Expedition and "Thanksgiving". These references are usually passive, some of the time painting the white colonists as the "Heroes" in the end.
I Don't really know how to solve the issues I've mentioned, as well as the other members, but I hope its fixed soon.


Shamya Z: There are so many components to the American public education system, that it's impossible to think that it’s perfect or completely terrible. Public education differs for everyone based on the place and community in which they live. Kids learn from their experiences, so their environment has a huge impact on them in their future years. Someone going to school in a very conservative, rural environment gets a different education than someone growing up in an urban environment. The teachers and classes available also greatly affect the student. Two teachers of the same course could teach very differently. Thus, two students in the same grade, taking the exact same courses, but going to different schools, could be learning at completely different levels.
One of the most factors of public education is that it’s free (until college of course). Countless children, who would otherwise not receive an education, benefit greatly from this. My hope for the future is that college will become easier to pay for, if not completely free.
Lastly, I believe that many schools do not pay enough attention to their arts programs. There are countless talented artists, musicians, photographers, etc. who are not given the chance to advance in what they love. Personally affected by this, I hope that these people get the opportunity they deserve.

Simone T: There are so many facets, good and bad, to the American education system. It's amazing that we have a public school system to every kid gets the education they deserve, but many schools are sadly underfunded, leading to environments that are unhealthy and not conducive to learning. We also aren't particularly inclusive of people of color. Our history textbooks give us a page or two every few chapters, and then move on. Luckily, that is slowly changing. For example, the new AP US History curriculum doesn't sugar coat things and speaks explicitly about the struggles of people of color in America. Honestly, one of my biggest problems with the school system is the stress that kids feel over it. Countless numbers of kids are overworked, exhausted, and have incredible amounts of pressure on them to do well and take as many AP classes as time allows. I get an amazing education, and I really love my school, but that's not to say I'm never stressed. I've known way too many people, myself included, who have had breakdowns in school bathrooms/at home/wherever because school just gets to be too much. Everything begins to pile up--school, homework, sports, arts, extracurriculars. We only have so many hours in a day to get things done, and the pressure that is put on kids to do a little of everything, from arts to sports to volunteer work, is overwhelming. It's a sad but true reality, and hopefully students will be able to start an honest and open discussion with their teachers and make a change, because the mental health of students is more important than schoolwork.

Carly P: I, personally, receive a wonderful education. My town's funding is pretty good: We have a nice lunch service, a lot of extracurricular programs (not just sports), a Career and Tech program for students not looking towards college, scholarship programs, transportation, and a large campus. I mean, the kids in the school often suck, but overall I feel very lucky to be offered this... Because a lot of kid's aren't. Thousands of school's in the US face funds so low that supplies are unable to meet the demands (ex: 200 History books for 500 students) and teachers are either unqualified or overpowered by large classes. And this is from "the most powerful country in the world". So, what the hell does that mean for the least powerful countries in the world? It means there are still, approximately, 70 million children that receive no education. This does not destroy the issues American students face, but it puts them in a very real perspective.

The United States' Education system is no where near perfect, but I'm still extremely thankful.

Tyler T: In my opinion, the American Education System has a lot of flaws. I've had the privilege of going to good schools all my life but only because of permits. The fact that you usually are not allowed to go to schools outside your district baffles me. The government knows what people predominantly live in certain areas. The "black" schools are low funded while the predominantly white schools receive more funding. I know that it's the cities call on how to spread around money but it's no coincidence that black schools in bad neighborhoods are struggling more. In my opinion I believe that this is the new way of segregation, only it happens on the low. They make it so hard for people from other districts to go to better schools and use the fact that they live farther as an excuse. Another bad part about the American Education System is that it has stopped helping students. It makes it all about working with other people and getting graded as a group which isn't fair. The teachers don't help you anymore even when you and the other students clearly need it. Who does that teach? We shouldn't be forced to work with people who don't want to work because that puts a strain on our grade individually. The thing I hate the most is the required P.E. I believe that it's contradictory to everything they try to teach us like how "we're all perfect in our own way". They say this and then tell us that we need to weigh a certain amount and run a mile in a certain time to pass. That's not teaching me anything except that I'm not healthy and my grade reflects it. The American Education System needs many changes and I hope it's on its way to making them.

Jade M: As a citizen of Canada with special needs, I've had a decidedly similar yet definitely different experience in regard to education than my American peers. Currently in college, I feel enormously blessed to have been able to access free education as a girl in the location of our world I was born into.
Where my experience often differed was the reality of living with a disability.
I grew up attending an alternate form of education, known as Waldorf. While often praised when conducted properly upon ideology, my experience was less-than-ideal, lacking in basis learning often within the curriculum. Although I excelled during my attendance of this institution, I emerged into standardized (public) education with gaping holes running amok through my knowledge. Despite this, I continue to feel blessed for the educational opportunities I receive, while recognizing the social horrors of the learning environments currently existing, especially in regard to a lack of respect and understanding towards special needs individuals. While volunteering through my secondary school while I was attending last year for a program assisting in education fellow young adults with special needs, I was truly saddened by the stigmas explored by my fellow students.
in conclusion I do recognize the incredible opportunity I received with Education, and my only wish is that this system can improve over time across the globe, including all children, regardless of gender or economic background. Education is a basic right, we all deserve safety in regard to it.