I'd Rather Be Real

I'd Rather Be Real 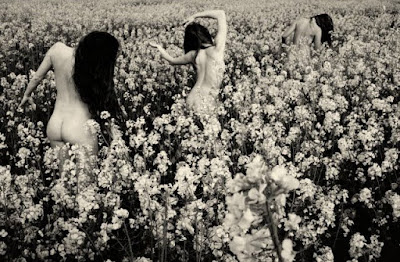 Shattered rust-dust on a transmitted crust of marketable frustration. This is the way these bodies locked in nauseating daily rotation, so alike yet unlike mine are communicated, through my own eyes. Eyes that compare the gyrations of these manipulated, advantage-taken scanty figures to my own eyes, nose, lips, hair and where it exists, hips, breasts and thighs, to the bodies of the women I know and love dearly in my own life.
And I wonder to myself: Why is the image of who I am, and those who find themselves romantically or sexually attracted to female company, told to be and to settle no less than for, not of an attainable human physicality. So then I wonder, through my understandable blunder, Will I ever be enough? Will someone ever truly desire me solely, if my skin holds imperfection, my weight fluctuates in lilting waves with the moons deliverance and my elbows point odd directions?

Are these women, teeth bleached by edititive methods in any way satisfied, feeling as if they have reached their potential and rectified their realities while receiving the respect of those which have held their professional company?

If so, then I will not wrench such a formidable victory from the aforementioned, however I very much doubt that this is the true experience for them upon gazing towards themselves within the folds of a glossed transformation. The message emblazoned in corrupt silent language shrieks of neon plasticity; that they were not enough, they needed to be frilled and altered, sliced and debauchered to suit an unattainable fragmentation that does not exist beyond eye-glossing screens or mind-glossing pages. There is no empowerment in the solicitation of female nakedness, only financial endowment for the 959th-floor-office-lounging, cigar-toting CEO Dowager Prince of Malpractice.
You exude confidence about an aspect of your appearance that these corporate interferences have not deemed a trait connected to beauty?

Prepare to earn a fate worthy of no other denigrate, for that will be quite erased from your once-unacceptable visage if you so involve yourself in this engorgedly reductive industry.

"Mommy, why does the woman on the shiny paper not have wrinkles when she smiles? Even little babies have crinkles around their eyes when they're smiling."

Our daughters wonder what the world is becoming, and that is when we realise that we've succumbed to numbing of the mind whilst thumbing sordidly through tabloids of our alleged shortcomings.

You do not determine what causes me to be worthy in the physical sense that you insist you are so knowledgable. For there is no value in how you appear that skyrockets above who you are in your heart, let me state that quite clearly, for fear you may not hear me over the oppressing sound of you stating the lackadaisical ugliness of my natural appearance. You do not determine what makes the woman that you pruned upon with scissors of control-shift brutalities beautiful. Everybody regards beauty in their own way, some in the pride of presentation, in glamorising upon their present attractions some in the acceptance of natural vision, of embracing what to them by Mother Earth was given, this varies from being to being to being to being, that's a human experience; this is a robotic deliriance. Why search for non-existent perfection, a journey from which I may never heal?

I'd rather be real.
beautyandstyle body positivity feminism jade poetry