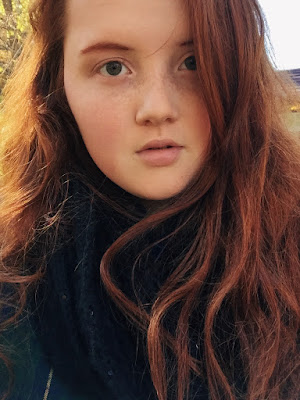 Lydia Bork's photography tells stories. Whether it's about somebody living in the moment, or not living in the moment, per say (see: Things We Never Said), Lydia has the ability to tell linear stories using her incredible knack for photography. From gloomy skies to shops flooded with memorabilia on the walls, Lydia never has a boring shot. She is a child of detail and representation. Lydia's interpretations of everyday events will have you pondering the mysteries of the universe (or just the world outside your front door.)

Interviewing Lydia truly made us reflect on our own creative techniques. She is a true warrior, who has found ways of overcoming negative things in her life and expressing herself through photography. We are truly proud of her development, and hope to see even more work from her soon! Check out our interview with her and her breathtaking collective below.

Where do you draw your inspiration from?
I can't exactly pin-point where I get my inspiration from. Sometimes it's an instinct and other times I develop an idea in my head for days before I'm finally able to capture it. A lot of my photos, and the way I take them, are a coping mechanism for me when I'm struggling with something internally/externally, or just feeling down in the dumps. It's so, so satisfying to be able to express a feeling that I can't articulate in words through pictures instead. And to have a whole community of followers and photographers feel the same emotions that I felt when they stumble across my photography, is what inspires me to keep going.


When and how did you first start doing photography?
I first started photography before I really called it photography. At the time when I was thirteen years old, there were more just "edits" to me. In a similar way that I still do now, I used these "edits" as a coping mechanism for the depression and anxiety I developed at this problematic age. It was an escape route for me, and I made this secret Instagram to showcase my creations. I still have the account, and looking back, I've realized how much I've not only grown as a photographer, but as a person as well. The photos are dark, almost a cry for help, and they portray a girl who's only known way to express her emotions is through her photos. And while I still use photography to cleanse my body from negative thoughts and feelings, I'm in a much better place mentally and physically. And while most people would get embarrassed if they found their old Instagram, I always feel proud when I look back on it and remember how far I've come as a person and a photographer.

Describe the color purple to someone who's blind
The colors red and blue, mixed together, create the color purple. Red is often misinterpreted as the color of anger, and while it can be, I like to think of it as the color of passion. Whenever you're feeling something that empowers your whole body, whether it's anger, or exhilaration, that's red. Blue is another misinterpreted color. It tends to be connected with the feeling of sadness, hence the saying, "I feel blue." While it's also considered to resemble the adjectives dull or somber, it can also represent just as passionate feelings as the color red does. So, when you combine these two extremely powerful colors, you get purple. Purple is the color of neutral, at least in my opinion. It describes the feeling of content, when everything in your life may not be exactly as you want it to be, but you're at peace with it. When you're peaceful, you're purple. And that's a color everyone should want to be for the rest of their lives.


Would you rather see in stripes or cheetah print for the rest of your life?
I would rather see in cheetah print. When I think of stripes, I think of the "Seeing the world in only black and white" saying. You're either seeing the world in black, or white: right or wrong. And while that sounds incredibly simple, it's almost too easy. You're meant to figure things out throughout your entire life, and some are extremely difficult. But no matter what struggles I have to face, I'd rather experience and learn from them, than take the easy, boring path.


What do you want to say to young artists out there who are still trying to find themselves?
When I first started out, I focused way too much on what others were taking pictures of. I wanted to be just like them, and that's a difficult mentality to rid yourself of. It's extremely hard to be creative when there's just so many incredibly talented photographers, who seem to always come up with beautiful ideas without even trying. And I know that originality is a major struggle, and how infuriating it is when you realize there's so many pictures of the same idea, something that you might've worked so hard on. My advice to you, is to not worry about originality. So many, if not every, photographers captures similar sceneries and subjects. But it's the story behind the photo that makes it original. The way in which you capture the photo, the emotions that were flourishing throughout your body when you were behind the camera, and the vibe that you want the photo to exude is what makes your photos yours, and original.

Here are some of Lydia's refreshing pieces: 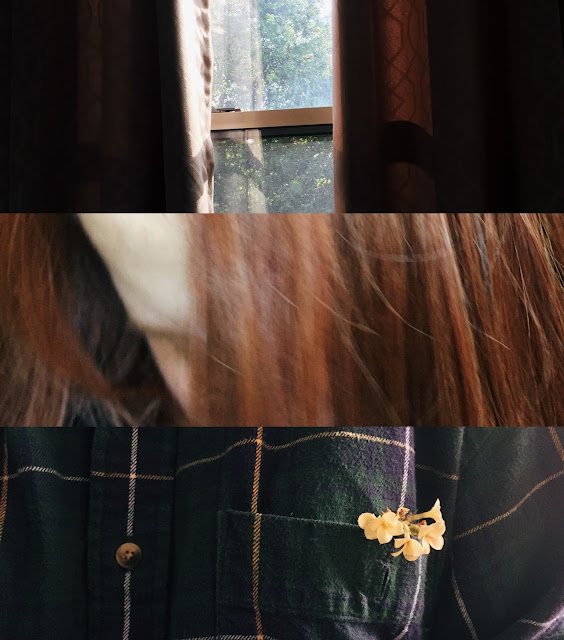 Details
I’m not entirely sure what inspired this. I took each picture on a completely different day, they’re all months apart from each other. There’s just certain moments where I feel a sudden urge to create. I love making collages (if you follow me on Instagram, you probably know this) and so whenever I’m devoid of inspiration, I make collages that usually match each other in color scheme. And this just happened to be one of them that turned out rather well. I gave it the title "Details" because I think each picture is so simple, yet highlights certain aspects that make it pleasing to the eye. I'm not good at explaining things, but I guess it doesn't really have to make sense. That's the nice thing about art. 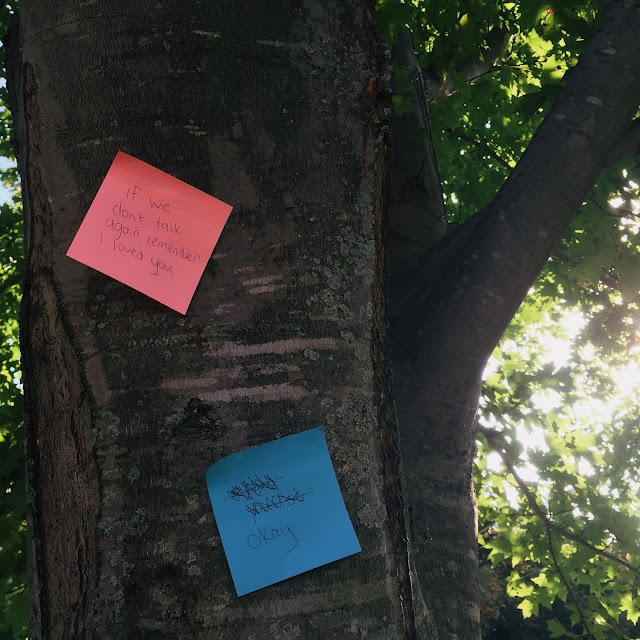 Things We Never Said
I got this idea during school. I actually brainstorm most of my picture ideas while I'm in school, which isn't the brightest choice. Oh well. At first glance, most would interrupt this photo describing lost love, a relationship that ended poorly and will most likely never return to a healthy standpoint. But when I was shooting this, I wasn't thinking about a romantic relationship (mostly because I've never been in one HA). I think anyone who has ever cared for someone deeply, and then suddenly lose them in the blink of an eye, can relate to how devastating and humiliating it feels. To put your heart and soul into any type of relationship and get nothing but tepid gestures in return is extremely unfair, but it's a fact of life and it helps us learn more about people, and ourselves. Also, little life hack for you: sticky notes do NOT stick on trees. I had to hold them in place with tape. What a let down. 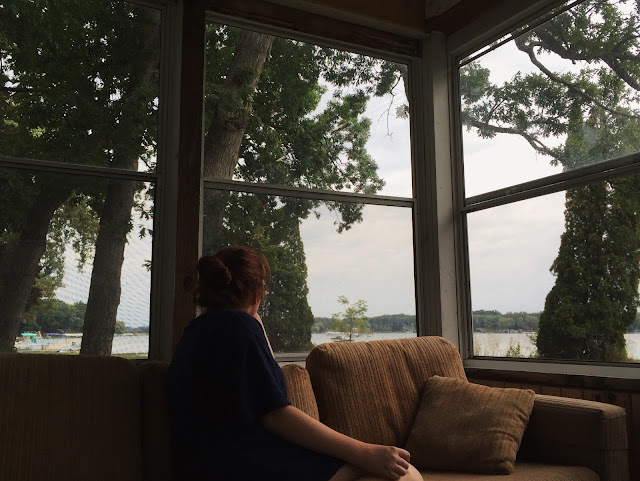 Lazy Sunday
First of all, this is one of the most difficult pictures I've ever had to capture, because I'm the model, which is not one of my higher skills, and I take all my pictures with my iPhone, so I don't have a tripod for it. I don't even remember how I managed to get my phone to stay up, but half the time they were literally just pictures of the dirty ceiling. New aesthetic, anyone?
But honestly, I do love this picture. It's at one of my most favorite places in the world, my grandparents lake house that's been in my family for generations and it is a place I am lucky enough to call my second home. This was taken in our cottage next door to the actual house. The cottage is the most grungy development you might ever step into, but I love it regardless. It's a true lake cottage and it will always be a part of me no matter what. 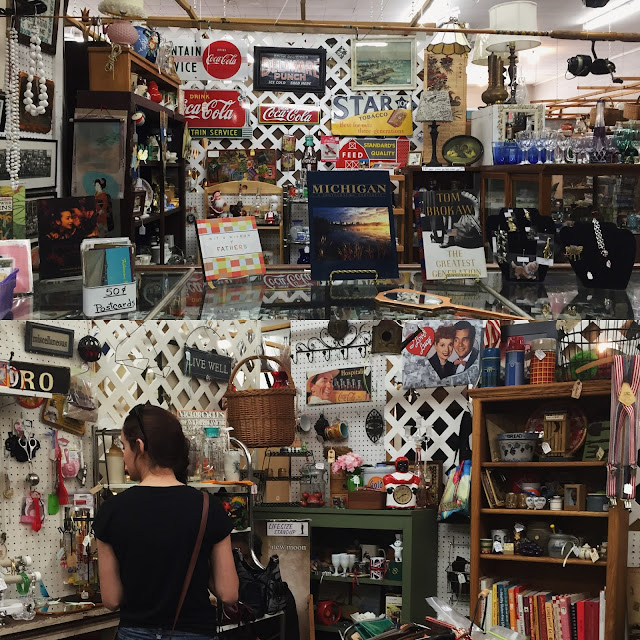 
This past summer, I spent a great deal of time exploring antique shops. I took these pictures at one in a small town in Michigan with my cousin and our friend over the fourth of July, and it's definitely one of the better ones that I visited. I was taking pictures of nearly every exhibit, and it's something that I do that drives everyone crazy, but I don't care. I love taking pictures and capturing memories. The overall vibe of this photo is what gets to me, because all around me were items that once belonged to someone else, a whole store of memories, and it was just so cool to think of how each item could have impacted someone's life. A mug could've belonged to someone's grandmother, a book could've been in a teacher's first classroom, a rug might've been in someone's childhood bedroom, and so on. I think a lot about these situations, maybe too much, but most of the time it allows me to create something beautiful, and I have a lot of pride in that 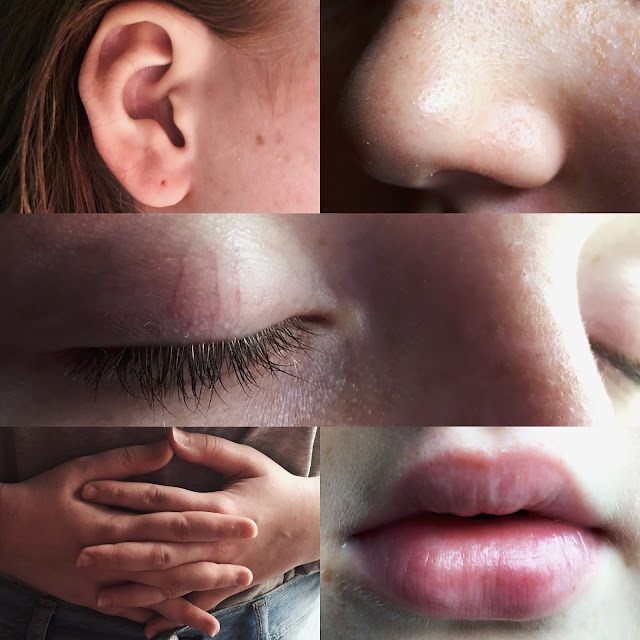 
This collage is actually a recreation of something I did a couple years ago, although this one turned out much better. I think we, as a society, only notice the negatives in our bodies. We wish for characteristics we know we will never have, yet we let these desires destroy us and completely manipulate the way we see our bodies. The human body is just, well, incredible, when we really stop to think about it. There are so, so many different ways that it can be beautifully sculpted, and I really wanted to capture that in this collage. That at the end of the day, no matter our weight, height, or the amount blemishes and marks that are scattered across our skin, we all have the same five senses. Our bodies all work the exact same way, yet they all look so different. We are all able to hear, smell, see, taste and touch the beautiful world that we live in, no matter what our appearance may be. And there's nothing more special than that. 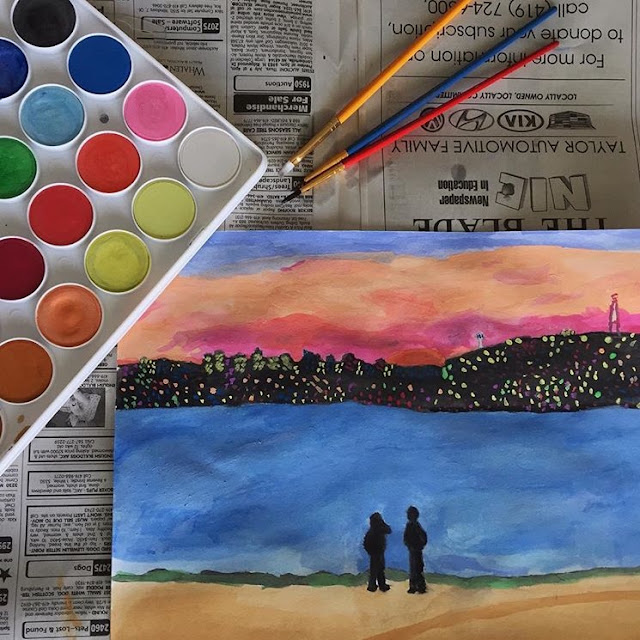 I Was Your Sunset, You Were My Sea
First of all, I truly enjoy painting and drawing, but I'm clearly no Picasso. I wish I had a more descriptive reasoning as to how I obtained this idea, but honestly, I saw a photo similar to this on Tumblr, and I wanted to recreate it with paint. I, like many, enjoy the aesthetics of the sky, and I think sunrises and sunsets are some of the most incredibly beautiful things that the world has to offer us. And one day, I want to watch the sun rise or set completely, with no camera on me, with someone I care deeply for, whether it be a friend or future lover (heh we'll see), and just sit and not worry about anything, not school, not social media, not my future or past. To just be in the present and relish in something beautiful.