Weekend Special: Sorry Not Sorry, An Interview With Megan Campagnolo

on October 10, 2015
Priscila and Jazmine interview the crafty and creative mastermind behind Rosehound Apparel. 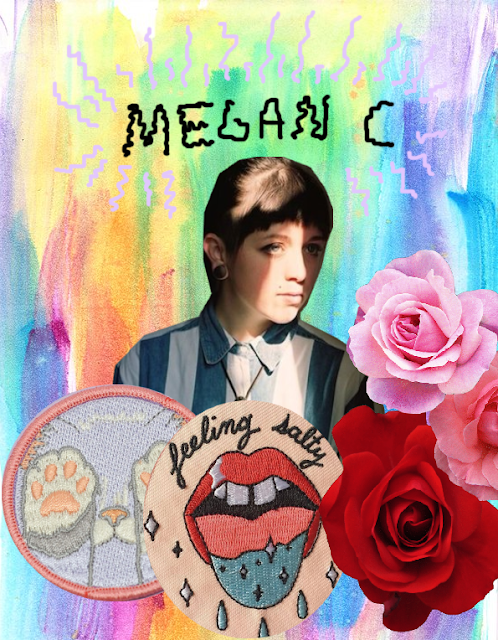 
Earlier this week, Megan Campagnolo, owner, founder, and creator for the awesome Toronto-based independent online shop Rosehound Apparel, graciously spared us some of her time to sit down and answer our questions on feminism, being a female e-commerce owner, and what inspires her.

Rosehound Apparel sells the most celestial stuff to put on your clothing, backpack, forehead, etc., from quirky, beautifully hand-crafted patches, to buttons and pins reminiscent of Tai Frasier from Clueless. You can follow Megan's mind baby here.

RISEN: What inspired you to start Rosehound Apparel? What does the shop name mean?

MEGAN: The idea for Rosehound sparked during my 4th year at Ryerson University's School of Fashion, where I attended in Toronto.  The feel and body of my brand was largely inspired by my graduation project, which was Twin Peaks themed and really focused on my interest in embroidery.  It led to creating my first collection of embroidered sweatshirts, which turned into embroidered patches and eventually lapel pins.  The name... came to me one morning that I woke up in my room (which at the time was painted pink and fully adorned in floral prints and Black Sabbath posters) and I realized just how obsessed I was with flowers, especially roses.  That was the day I designed what would becoming my "Sorry not Sorry" patch, which depicts a hand holding a bouquet of flowers that were ripped from a garden.  Since then, I have made it a point to include flowers in most things I create.  I guess I am a hound for roses??


RISEN: What struggles have come up whilst owning your very own online store?

MEGAN: As an independent designer running my own store, there is an overwhelming amount of multi-tasking that I've had to take on.  From designing new products on time, creating samples, conducting market research, updating social media, taking product photos, making sure mail is being sent out every day, customer service, dealing with stockists, inventory, and maintaining a website, I do everything over here.  There are challenges every day, and I'm always trying to learn something new.  The most difficult part of my job for me would have to be the tech-y stuff, because I swear I am crying to someone over the phone every day trying to figure out how to set up my printer or something similar.


RISEN: Do you consider yourself a feminist? Who is your favorite feminist icon?

MEGAN: As a female-run independent company, I very much consider myself a feminist.  We live in a time where feminism is brought up a lot in social politics, and we as females have a long way to go.  I think we owe a lot to Emma Goldman, who played a huge part in the fight for womens' sexual rights, which is something I feel really strongly about.


RISEN:  Rosehound Apparel carries a lot of pop culture-relevant items, as well as dreamy, nostalgic 90's wear such as young Leonardo Dicaprio pins and amazing patches with phrases such as "feeling salty". Would you say that pop culture has a major influence on you as a creative and as a shop owner?

MEGAN: Oh, totally.  I am such a nut about the 80's and 90's.  I watch way too much TV and movies on Netflix while I sew and draw, that it's inevitable.  Especially Twin Peaks, and countless cult high school movies.  It's really great that so many of my customers also identify with this stuff!


RISEN: What social justice issue are you most passionate about, and why?

MEGAN: I was super disappointed when I learned that Planned Parenthood was defunded in the States.  I live in Ontario, Canada where birth control and abortion are fully accessible to women, and I can't imagine a world where this wouldn't be supported by our government.  Planned Parenthood is such a great organization, where I have personally gone at a crucial time that I needed advice.  In the spring of 2016, I am hoping to begin giving a portion of my brand's proceeds to Planned Parenthood in light of this very recent, horrible news.


RISEN: What is the weirdest, quirkiest thing about yourself that you would like to share with us?

MEGAN: I have blue hair and salt and pepper hand tattoos, but the quirkiest thing about me has got to be my insanely variable schedule.  I have no problem with staying up all night sewing or drawing, and my schedule flip flops a lot. Most of my friends, especially my roommates, think that I am crazy.  I've been known to eat hot dogs at 7 AM, and go out for brunch around midnight.


RISEN: Favorite album of all time?

MEGAN: "Of all time" puts a ton of pressure on me!  It's definitely a toss up between "Fever to Tell" by the Yeah Yeah Yeahs, and "Blood Visions" by Jay Reatard.

MEGAN: @shannoneperry - I love tattoos so much, and make it a point to visit artists when I am out of town.  Shannon Perry from Seattle is my favourite - her work is so interesting and truly unlike anything I've seen in Toronto.
@patchyalater - As someone who is in the "patch game", I have completely fallen victim to collecting patches myself.  Patchyalater makes some of the most original patches out there, heavily influenced by the vintage look of patches from the 70's.
@rikohelmet - Is an illustrator based in Tokyo who I've been following since the beginning.  I saw her work through Hunx and his Punx and Shannon and the Clams' album artwork and fell in love!
@lennyletter - The feminist newsletter project of Lena Dunham and Jenni Konner is full of great, positive material bringing together art, politics, and every day stories pegged at bringing women together.
@pygmyhipposhoppe - Also an Instagram I've followed forever... Emi has the best selection of curated knick knacks and vintage treasures.  When she asked to stock my stuff earlier this summer, I was over the moon with excitement.  Definitely recommended!
interview jazmine megan campagnolo priscila rosehound apparel weekend special