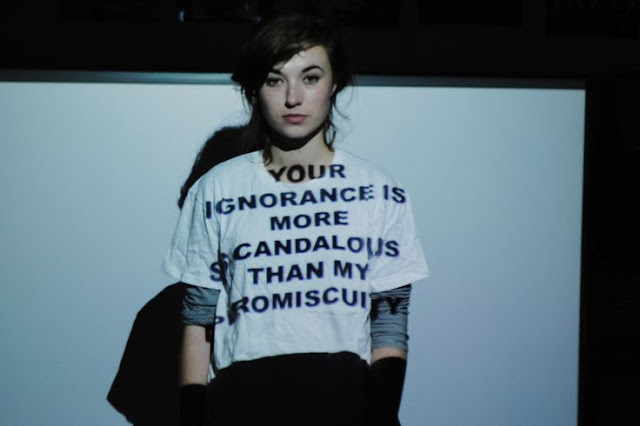 
When the human race was just beginning to civilize, males were chosen as leaders because of the raw strength that they offered.  Men were brought into power for practical reasons--  they were able to hunt for and protect the people using their biological advantage to strength.  However, as society advanced and leadership positions no longer needed to be based on brute strength, almost exclusively men maintained them.  The situation grew and grew until women were largely seen by society as inferior; thus, sexism was born.  With this uneven view of men and women came a greater respect for men in general.

It affects women in the workplace, social atmospheres, and even within their own families.  One of the most unsettling things about this concept is that seems to be applied solely to women- men are almost always given the same respect regardless of their promiscuity.  Slut shaming is the punishment of women for exercising the same rights as men.

One of the greatest instances of the hypocrisy of slut shaming is that often when a woman requests birth control, she loses respect, but when a woman has an unintentional pregnancy she is also looked down upon; whereas a man who buys birth control is seen as responsible.  This example reveals a disturbing deeper meaning.  This seems to show that the world believes men to be more entitled to expressing their sexuality than women.  The vocabulary used to describe a promiscuous woman include derogatory terms such as fast, hussy, whore, wench, trollop, floozy, nympho, and slut, to name just a few, while an equally promiscuous man could be called anything from lady-killer to stud, or even Romeo.  Even in the American school system, one of the most common examples of slut-shaming is evident: restriction of young girls’ clothing (Jonsson).  In one school, slogans such as, “modest is hottest” and, one of the worst offenders, “boys will be boys,” (in regards to teenage boys’ raging hormones, which, by the way, are not scientifically proven to be any more “raging” than those of girls,) were used to justify the dress code (Huffington Post, Mayer).

Part of the reason that this is so detrimental to girls, and people in general, is because it condones boys behavior based solely on gender and forces girls to dress for the boys’ convenience, relegating girls to second class citizens.  In all of these examples, the woman is condemned while the man is excused, or even celebrated.  This is extremely problematic-- society seems to forget that sex is not a one sided thing.
The only way for this double standard to ever be eradicated is for society to start viewing women as just as human as men; currently, by denying a promiscuous woman the same respect as a man, society is indicating its view that women deserve less respect than men for doing the same exact thing.  It’s this simple- a society doesn’t respect women’s rights to their own sexuality, doesn’t respect women, period.