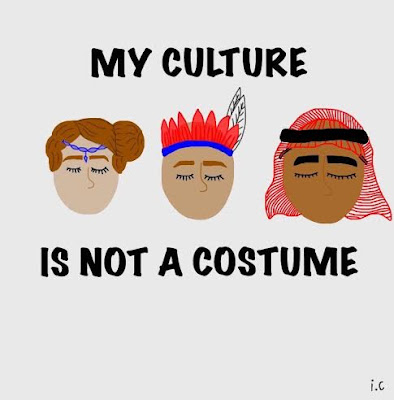 Halloween is one of the biggest commercial holidays of the year, and it’s nearly impossible to resist getting into the spooky spirit of October 31st. For some people, preparing for this often highly anticipated day includes planning out their costume months in advance, all for the sake of having the most original idea. We all know at least one person who’s dressing up as a minion, and another who’s donned a jersey as a last minute football player, but if someone in your social circle is pulling out blackface in the name of costume contestry, it’s definitely time to reevaluate your group of friends.
Simply put, other people’s cultures and ethnic identities shouldn’t be used as costumes. “Appropriation” seems like a harsh word for a holiday centered around dressing up because, it’s “just a costume,” right? Wrong. When you poke fun at the lifestyle and heritage of minorities for your own personal use, you ultimately trivialize the years of oppression and discrimination that they’ve undergone and continue to endure while contributing to harmful stereotypes that reinforce and normalize subtle racism and intolerance.
It’s common sense that you shouldn’t act on every idea that pops up into your head, yet there are still people who push the “costume” boundary past appropriation straight into ignorance. Both the LGBT and African-American community face present day insensitivity that lead to countless deaths and hate acts, but this doesn’t stop Halloween costume companies from creating a Caitlyn Jenner costume, and Caucasians from painting their face brown. Not only are these gimmicks harmful, but they’re capitalizing on groups that are oppressed for the same reason they’re commercialized.
On the other end of the spectrum, although the season for music festivals is long over, the burning desire that leads people to dress up as Native Americans for personal enjoyment starts up again around the Halloween season. Native American and indigenous peoples have been stigmatized since Christopher Columbus “discovered” this country. Along with the general disrespect that comes with appropriation, the inconsideration is heightened when you manipulate Native American beliefs to yet again suit a European tradition. Suiting up as Pocahontas or a Native American chief isn’t creative, it’s crass. These were and are real people, not costumes, and they deserve more respect than a cheap Party City imitation.
In fact, another “easy” costume often seen on Halloween yet again bears no actual relation to the original Christian harvest holiday. Calaveras makeup, or skull makeup originates from Dia De Los Muertos, or, Day of the Dead. Day of the Dead is Mexican holiday that begins on October 31st and ends on november 1st, and a simple Google search could help to differentiate between two very different cultural celebrations. Unless you’re Mexican, and you’re celebrating the spiritual three days that celebrate the passing of loved ones into the afterlife, then maybe sugar skull makeup isn’t something you should attempt.

To reiterate, the religions and traditions of other cultures are sacred, and they shouldn’t be exploited for your own personal enjoyment. As human beings, our one shared commonality is culture, and our ability to love, believe, and celebrate across many different nationalities. We borrow and adapt to the traditions and lifestyles of our foreign neighbors and ancient ancestors, so we should be able to appreciate them without appropriating them, especially on Halloween.
costumes cultural appropriation culture halloween racism terra