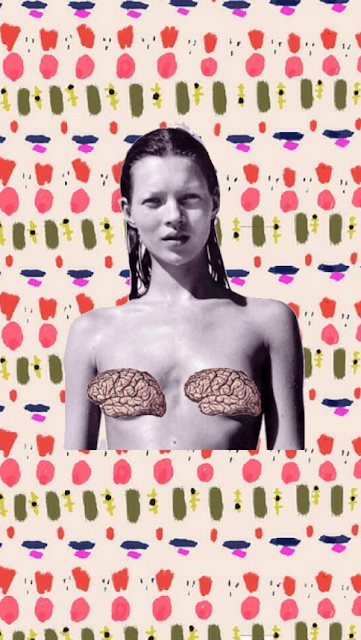 Your body does not define your mind.

When I was at the ripe age of 6 years young, my "bubie" Fern, as I sometimes call her when I want to feel as Jewish as possible, had a double mastectomy. Fern, with her big blonde halo of hair, and lilting New York accent, could take on the world. Or so I had thought. How do you exactly explain a double mastectomy to a 1st grader? I was precocious, and would repeatedly ponder the hypothetical worst: "Is grandma going to die?" I had never thought about breasts, or lack thereof, so it came as a real shock when I found out just what was going down. After that I wept for her and her "lost breasts", my salty 6 year old tears appearing now ignorant and childish.

The first time I saw her after the surgery we were in her bedroom, looking through her floral jewelry box that today makes me sigh with vintage-y adoration. I had always loved this ruby ring of hers, pulsing pink like a beating heart. "Ruthie, would you like to see?", in her eyes she was asking if I wanted to see her scars. I nodded tentatively, and braced myself for the worst, expecting reptilian scales or green skin like grass. Instead there were two faint pink lines, the skin around it delicate looking. Nothing more. It looked like a flat chest. "Does it hurt?", I had asked. "Eh only sometimes.", she shrugged breezily. So much candor. After that we went and played Mancala, our favorite game involving marbles and luck.


As I make my descent into the world of pubescent girlhood, an important thing has dawned on me. My bubie Fern chose NOT to have reconstructive surgery. "Who needs them at my age?", she had said. She chose NOT to ensure that agonizingly painful procedure for the sake of society's views on women and what their breasts should look like. We have always been told what we should look like, how we should behave, even our own thoughts have been controlled at some point or another. If you look at every pop star that's ever had breast implants, and has then been blasted all over the media because of it, you'll see that it's a multi levered chain pulling us in different directions. We pine for sexual fulfillment, because we are told that we have to, and then when we do it is thrown back in our faces.


On the other hand, girls my age are being chastised for "revealing too much" through their clothing choices, appearing "overly sexual", though it makes you wonder why people are thinking like that in the first place. This is especially evident at school, where we are 24/7 being told to cover up. An important thing some ahem men may not understand is that we as females cannot control the size of our breasts, tushies, and hips. We can however control the size of our brains, which are indeed more important anyway. Instead of being put down for showing too much, boys should be put down for negatively impacting our self images. We always have too much or not enough. We are either labeled sluts or prudes. But we don't have to be.


A 6 year old me was able to understand that our breasts are ours, and ours only. We don't need them for the sake of making others happy. Sure that is a wonderful bonus, but ultimately they're your boobs. As in the case of my Bubie, we may not necessarily even need them. She really hasn't "lost" them, as I feared she would. They were doing her more harm than good. And at the end of the day, we are still us, our ruby ringed hearts are still beating, our laughs still throaty, our lives still a game involving marbles and luck.
body positivity bodyandmind breasts feminism Ruthie Zolla